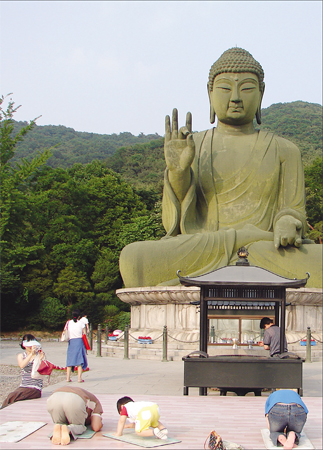 Visitors bowing before a bronze statue of a sitting Buddha at Gakwonsa Temple, which was built as an offering for the unification of Koreas. By Lim Chang-hoo

CHEONAN, South Chungcheong ― In the minds of most Koreans, Cheoan would be the last place to discover sculptural traditions.
For decades, the city had a reputation as a destination for busloads of bored middle school students dragged along by their teachers for obligatory trips to the birth place of Yu Gwan-sun, an independence activist, who died during a period of persecution by the Japanese colonial regime.
However, on a recent Sunday afternoon, my companion and I experienced pure amazement as we stood in front of a giant sitting Buddha made of bronze, at Gakwonsa.
We had passed the temple’s tranquil lake and climbed some steep steps, altogether 203 of them, which symbolize numbers from Buddhist scripture that stand for suffrering, wishes, incarnation, affinity and spiritual treasures.
But, just after the steps, there is an intimate pathway through a forest of maple trees, an unusual find at this time of the year, which briefly distracts visitors. The purpose of the trees seems to be to keep the statue hidden away so that it can be an amazing surprise. As the pathway reaches its end, the sitting Buddha suddenly appears like a magic castle in a wonderland.
The bronze Buddha, with Mount Taejo in the background, has oxidized to a moss green over the years. It sits on a granite pedestal that represents a lotus flower and has an imposing dignity. The stark presence is beautiful yet bizarre, an impression that also captures how I felt about the city’s downtown, which is quickly being transformed from a deserted countryside town to a hot mecca of contemporary art .
Gakwonsa is the second largest temple in Korea after Bulguksa in Gyeongju. Their statue is by far the largest sitting Buddha in Asia. 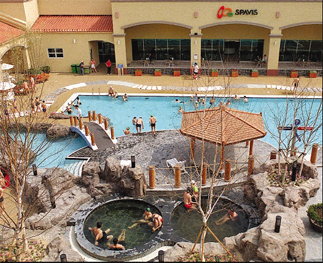 Asan Spavis, a popular hot spring resort, is less than half an hour from Asan-Cheonan Train Station [JoongAng Ilbo].

The length of the Buddha’s fingernail is a third of a meter; its ear stretches 1.75 meters (5.8 feet). The entire statue is 15 meters high and weighs 60 tons.
Yet the Buddha is not all it seems. The oxidization on the bronze surface of the statue is not the patina of age but something like the artificial stains on reproduction furniture, which are used to make them resemble antiques. Although Gakwonsa’s Buddha looks ancient it was actually built in 1977 by a Korean-Japanese who had it constructed as a tribute to Buddha and a prayer for the unification of the two Koreas.
Just 15 minutes away from the temple, it’s possible to get another surreal feeling at Cheonan’s Arario Gallery, a rising hotbed of contemporary art. It has a collection called “Hymn,” which includes a large surgical mannequin, intended for use as a dissection aid, that has been turned into art by Damien Hirst, a young British artist who is known as the favorite of advertising giant Charles Saatchi.
The “Hymn” works have practically become the city’s landmark since they were installed, drawing the eyes of curious residents who had no previous exposure to modern art. Indeed the gallery, which opened in 2002, has virtually turned downtown Cheonan into a center of contemporary art. That has helped the city to give itself a complete facelift and a more vibrant image.
Aside from “Hymn” which the gallery bought for 2.5 billion won ($2.2 million) in 2000, the gallery has literally sprinkled modern art collections along a street that leads from the gallery’s entrance to the city’s bus terminal. The area is named “Arario Small City,” and includes works by Hirst, Robert Indiana and others who practice the playful sensibility of post-modern art.
For years, Cheonan was known only as the hometown of Yu Gwan-sun, a female martyr who is an icon of the resistance movement against the colonial regime. In Yongdu-ri, Yu’s birthplace has been restored to commemorate her patriotic spirit. She was arrested during the March 1st Independence Movement, and died in prison after severe torture. To honor Yu, an Independence Hall of Korea was also built near her birth home, chronicling the history of the independence movement through documents and audio-visual archives.
If you are done with the history lesson, take refuge at “Three-way Park,” a famous stop-over for Korean scholars of the past, on their way to take the national exams in Hanyang, the old capital of Korea. There is a famous love story about a young scholar and a gisaeng which took place under the park’s willow trees.
The willow trees still exist, but the park is now visited by local residents taking leisurely picnics around its lotus pond, munching on their snacks and throwing their biscuits to the carps.
A day trip to Cheonan has been made much easier by the Korea Railroad. With the KTX bullet train, passengers from Seoul arrive in Cheonan in half an hour.
The train has enabled gourmands to sample Cheonan’s delicacies, which include walnut cakes and byeongcheon sundae, a traditional sausage stuffed with vegetables and pig blood stuffed in intestine. When you order a steamed sundae, they are served with steamed liver and pig’s ears. The byeongcheon sundae is richer than the ones stuffed with clear noodles that are typically sold by street vendors in Seoul. 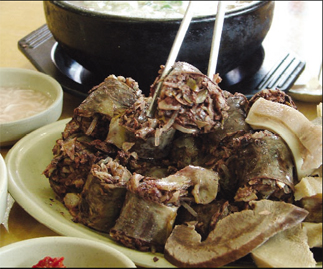 A typical dish from a sundae restaurant near Aune Market in Cheonan. By Lim Chang-hoo

In Byeongcheon Township, about half an hour from downtown Cheonan by a village bus, there is a street lined up with sundae restaurants. It’s where the dish originated and the sausages are also eaten in a stew by the merchants and shoppers in the town’s Aune Market, an outdoor market, which still opens on dates that end with 1 and 6.
The walnut cakes consist of round-shaped dough mixed with crushed walnuts and stuffed with a sweet bean paste. The taste is simple but it’s a gift often given to families and friends after a trip because they are available at highway rest stops across the nation.
Cheonan’s city government’s Website says that a local monk brought home a young walnut tree from his trip to Yuan Dynasty China in 1290. Since then Cheonan has been a haven for walnut trees. Farms near Gakwonsa still produce more than half the walnuts in Korea. In 1934 a gentleman named Cho Gwi-geum went to Japan to learn baking. When he returned home, he created walnut cakes. His store is now run by his grand daughter.
It’s like the old Korean saying ― a trip to Cheonan without walnut cakes would be like life without sweet beans. myfeast@joongang.co.kr 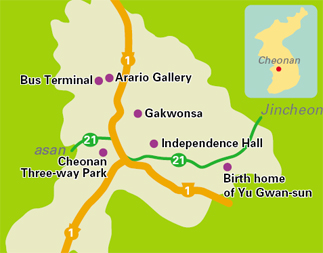 Cheonan can be reached by train or bus. Trains are available every 20 to 30 minutes. Public transportation in Cheonan is readily available. Take advantage of the bus system. Buses to Independence Hall and the birth home of Yu Gwan-soon leave from the Cheonan city bus terminal. Yu’s birth home is near Byeongcheon-ri where Cheonghwajip (041-564-1558) is one of the oldest sundae restaurants. Sundae stew is 4000 won for a bowl; a large plate of steamed sundae is 7000 won. For walnut cakes, Cheonandang (041-555-5111) near Cheonan train station, sells them with red and white bean stuffing. Hakhwa Grandmother’s Walnut Cakes (041-569-3370), founded by Cho Gwigeum, is another option. A bag with 50 pieces costs 5,000 won at both places.
For an overnight trip, there is the Onyang Hot Spring Hotel (041-545-2141), which was once a popular honeymoon destination. The hotel recently underwent a renovation, complete with an outdoor spa.
There are two train stations in Cheonan. One is Cheonan Station; the other is Onyang-Cheonan, which was set up for KTX. If you are traveling to Asan Spavis (041-539-8000) get off at Onyang-Cheonan. Arario Gallery (041- 551-5100) is located next to the bus terminal. Currently it has an exhibition by Kang Hyeong-goo.