A chorus line of busy amateurs

A chorus line of busy amateurs 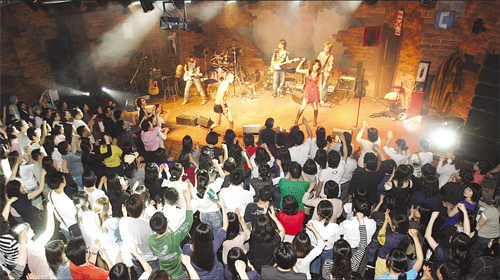 One “Headwig” fanatic in Daehangno says, “Every stage is just so fascinating; the performers and the spectators become one.”

Who ever said that only professionals can perform in musicals? Park Young-jun, 37, who runs an amateur musical club called “Let’s Sing,” is planning to stage a new musical at the end of this year with the club’s performing members. “During the last two years, we have staged six amateur musicals,” said Park, “The performances were great fun, but I was concerned that the work wasn’t ours but an imitation of other performances.” So Park decided to create a musical of his own.
“It won’t be as good as a professional musical, but it will be more creative and fun,” said Park , who runs an online club at www.letsingmusical.cyworld.com.
Like Park, the audience for musicals is changing and becoming more passionate about the genre.
There are people who no longer enjoy musicals just for their one-off leisure value. Instead, they watch the same musical over and over, study and discuss it with others and even produce versions of their own.
The musical fans are called “prosumers,” in other words, people who both “produce” and “consume.” Won Jong-won, a musical critic and a professor at Soonchunhyang University says, “It’s amazing how Koreans can be so active; they are the ones who are causing a big bang in the musical industry.” 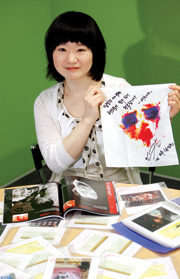 Sohn Sung-hee, 30, who has seen “Hedwig” more than 150 times, poses with a handkerchief that has autographs from the show’s performers. [JoongAng Ilbo]

Stage 1
Falling for the musicals
The changing culture of the industry is led by spectators who watch the same musicals over and over. An example would be “Hedwig.” Since the first performance in April 2005, it has played to packed houses ever since, thanks to these passionate spectators. Five hundred people have seen the show more than 10 times, and 50 have seen it more than 100 times. Among them is Sohn Sung-hee, 30, an office worker who has seen “Hedwig” 150 times.
“Up to now, nine different male performers have starred in the musical,” he said. “And each one has had a different way of developing the performance.”
He added, “I spend more than 500,000 won ($538) to 600,000 won a month watching ‘Hedwig,’ but I tell you, it’s worth it.”
“Thrill Me,” a show that opened last March, also has passionate spectators. It has been only two months since their first performance, but some of the audience have already seen it more than 30 times. Currently, there are ten or more active musical clubs, each having a minimum of 5,000 members to a maximum of 20,000. Among them, about 3,000 are known to be musical fanatics, who watch musicals once a week and voice their opinions at dinner meetings or on the Internet. With their offline encounters, they lead the public’s tastes, based on the presence they have developed online.
An employee from a musical production company said that devoted fans see a musical mostly as soon as it opens and they are the ones who deliver their reviews and comments right away. “This is why we pay a lot of attention to them,” he said.
Stage 2
Learning the moves

The members of the “Let’s Sing” club selected a few scenes from well-known musicals to perform at a gala concert last October. Pictured is a scene from “Aida.”[JoongAng Ilbo]

For the past year, ten members of the “Song and Dance” club (cafe.naver.com/songndance) have been studying music written by Stephen Sondheim, one of the world’s leading composers of musicals. They have translated English lyrics into Korean and they have researched the background and culture in which the music was produced.
Twenty members of “Song and Dance” have their own singing sessions and they invite musical actors and actresses to give lectures.
For the past five years, the club has been holding a group session every Monday, when most musicals have the night off.
Recently, they learned the song “Campus’ Spring” from the musical “Winter Story” and in the near future, they are planning to acquire the main theme songs from “The Phantom of the Opera.”
Lee Mee-ok, 30, a member of “Song and Dance” says, “Last winter, we held a small performance of the main songs from “Miss Saigon” and “Jekyll and Hyde.” Practicing and getting the notes right was hard, but I felt like a hero when I got them right.”
Spectators even learn how to dance professionally, which is a big part of all musicals. The “Welcome to Broadway” club has tap dance sessions called tappung or the tap-dance wind. “It is important to cooperate with other members since no one can tap dance alone,” says Yoon Hee-kyung, 28. “Recently, I’ve finally mastered the opening routine of “42nd Street.” These days, all I can concentrate on when seeing musicals is the dances. I’m very happy when I dance, it feels as if my body is an instrument in itself.”

“Let’s Sing Musical” have staged six performances since 2005. “Sing Legato” and “Gospel” are the main shows in their classical repertoire. Last October, they selected a few of the main scenes from well known musicals such as “Aida” and “Lunatic,” and put on a gala performance at the Youth Center in Songpa, southern Seoul. They held a total of four performances over two days with 40 performers. To stage the gala musical, members of the “Let’s Sing Musical” met for rehearsals once every week for four months, and then every day during the month before the show. Three hundred people watched each performance and some members are now considering turning professional.
There are also concerts that pay tribute to specific performers. Last Christmas, a musical was performed at a theater in Daehangno, Seoul titled “Kim Da-hyun and friends.” It was planned by Sohn Min-jung, a 36-year-old fan of Kim Da-hyun.
Sohn handled every aspect of the show including planning, arranging, marketing and producing, In the end he even got Kim herself on stage.
Many musical companies avoid these types of performances since “they do not produce any profits.” However, Sohn’s was a big success. On the first day, all 100 seats were filled. “No one would have imagined that I, who used to be a high school teacher, would be putting up posters on street walls,” Sohn said. “I owe it to the passion that’s in my heart toward musicals. Merely watching and attending musicals is not enough ― that’s an old story.”