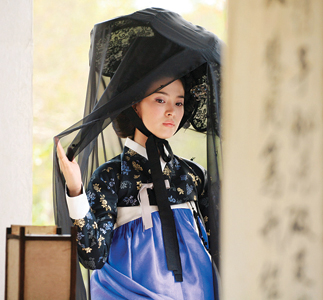 Hwang Jin-i, played by Song Hye-gyo. Provided by the producer

Hwang Jin-i, a woman of erotic style and flamboyant intelligence, was excellent at writing poems and drawing and she ridiculed the patriarchal society in which she lived.
Any actress would want to play Hwang Jin-I ― the famous gisaeng is one of the most colorful characters in Korean history, along with Chang Hee-bin and Seong Chun-hyang.
Many movies, dramas and novels have dealt with the life of Hwang Jin-i. Directors have sought out only the most beautiful actresses to play the role.
Do Geum-bong, an actress famed for her sensual body, was the first to play the gisaeng in modern film, starring in “Hwang Jin-i” in 1957.
After that, Kang Sook-hee starred in “The Life of Hwang Jin-i (1961),” and Kim Ji-mi followed her in “Hwang Jin-i’s First Love (1969).” Kim Ji-mi had a Westernized rather than a traditional Korean appearance.
Chang Mi-hee in “Hwang Jin-i (1986),” directed by Bae Chang-ho, was the most outstanding Hwang Jin-i character, since she was not portrayed as an enchantress or a prostitute as in the earlier movies. She was depicted as a wandering artist looking for freedom.
On TV, Ha Ji-won took on the mantle of Lee Mi-sook, who starred in a historical drama, “Women Powers” (MBC, 1982) when she took up the role in “Hwang Jin-i” (KBS) last year. The scenario of the drama was based on Kim Tak-hwan’s novel.
The drama emphasized the demanding training required of a gisaeng during the Joseon Dynasty.
And now Song Hye-gyo has brought us the most recent version of the famous female.
In “Hwang Jin-i”, a movie that was released last week, Song became the most powerful and erotic Hwang Jin-i that has ever existed. Chang Yoon-hyeok, who stirred our feelings with “Contact,” has directed “Hwang Jin-i,” and the story is based on the novel by North Korean author Hong Seok-joong.
The new “Hwang Jin-i” is far from ordinary; it is the first movie to dramatize a North Korean novel and the production budget exceeded 10 billion won ($10 million.) It also includes scenic views of Mount Kumgang.
The film’s sound bites ― such as “I laughed at the world” and “A woman from 21st century who lived in the 16th” ― have attracted plenty of attention. The new movie seems so cool that it could save the Korean movie industry from its current slump.
The strict social class system does not matter to Hwang Jin-i in this new movie.
Until she discovers her true origins, she enjoys her life as an upper class woman.
However, when the truth is uncovered and people find out that she was born to a maid, people try to evict her from the family.
Then, to everybody’s surprise, she turns herself into a gisaeng.
This highly educated gisaeng makes fun of the yangban, the men from the upper class, who try to patronize her. She made a decision to be a gisaeng by herself and chose her first lover, a manservant called Nomi (played by You Ji-tae). He is also a revolutionary character with dreams of a utopian society. In this film Hwang Jin-i comes across a rebellious woman resisting social stratification.
However, the movie is a little monotonous. Even though it deals with the intricate life of Hwang Jin-i, the movie has little tension and the plot tends to flag. The 140-minute running time tends to exhaust viewers.
Neither the personality clashes or the tearful romance is powerful enough to touch viewers’ hearts.
The plot is dramatic for a good movie, but the realization ends up leaving much to be desired, possibly because it was too faithful to the original book.
Despite the huge scale and dazzling visuals, the movie fails to be a masterpiece. It focuses too much on the radical and provocative aspects of the new Hwang Jin-i. However, Song Hye-gyo’s first role as a historical figure is successful enough. Instead of a petite girl we are used to seeing, she makes a good transformation to a mature woman. Fashion designer Guho was in charge of the costumes and Won Il wrote the music. No one under 14 admitted.