Back to basics with Christina Aguilera

Back to basics with Christina Aguilera 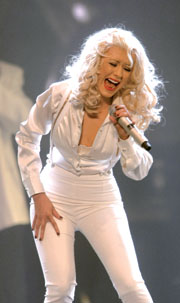 Christina Aguilera performs on stage during her previous world tour. Provided by the organizer

Roll up your sleeves and get ready to hear Grammy Award winner Christina Aguilera, 26, live this weekend at the Olympic Gymnastics Stadium, southeastern Seoul, at her first-ever concert in Korea. She is here to promote her third studio album, “Back to the Basics.”
Her career began on “The New Mickey Mouse Club” with Justin Timberlake, JC Chasez and Britney Spears in 1993. During the late 1990s, Aguilera, a.k.a. Xtina, was one of the leading American pop idols along with Britney Spears, NSYNC, and the Backstreet Boys. She made her solo debut in 1999 with the studio album “Christina Aguilera” and followed with her highly controversial sophomore effort “Stripped” in 2002.
Aguilera’s latest 2-disc album was a huge success, with the introduction of its three singles, “Ain’t No Other Man,” “Hurt” and “Candy Man,” all written by Aguilera and producer Linda Perry. Compared to her past albums, this one pays tribute to blues and jazz standards, mixing retro and modern elements.
Aguilera’s “Back to Basics Tour” kicked off in Tokyo Thursday. After that, she comes to Seoul and will also visit Shanghai, Bangkok, Singapore, Hong Kong and Manila. Special guests scheduled to perform with her in Seoul are Korean pop singer Ivy on Saturday and Lee Min-woo from the boy band Shinhwa on Sunday.
Organizer Ally S. Yoon from B4H Entertainment said, “Asia often is excluded from world tours, but this time, we can experience a large-scale, original concert that has been performed previously in Europe and the United States.” Previous Aguilera shows in the United States sold out in 76 cities and Seoul is expected to follow suit.