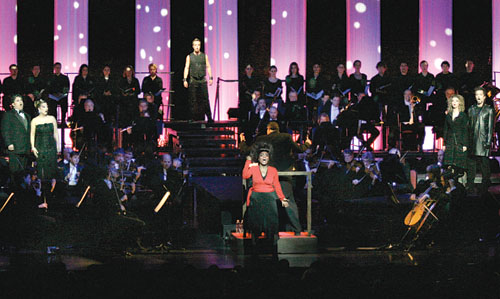 Simon Leclerc tries to emphasize singing rather than instruments. He believes that if the instruments are too strong the audience will be following the beat rather than paying attention to the songs.
“Get rid of the brass and you don’t have any choice but to listen to the lyrics,” Leclerc said. “When the only instruments are strings, oboe and flute the lyrics have a different impact.”
From Friday to Sunday, the Canadian-born conductor led the Seoul Philharmonic Orchestra at the Sejong Center for the Performing Arts in “The Coronation Ball,” which featured music from the French musicals “Notre Dame de Paris” and “Starmania.”
Instead of elaborate sets or dance routines, the singers performed with the orchestra as their backdrop. The songs performed included “Le temps des cathedrals,” “Belle” and “Danse mon Esmeralda.”
Since “Notre Dame de Paris” was introduced to the Korean audience in 2005 with great success, French musicals including “Don Juan” and “Romeo et Juliette” have been rushed into the Korean market.
“The Coronation Ball,” organized by NDP Korea, was an extension of the booming French musical scene in Korea.
The Canadian conductor said that he made some changes to “Starmania” for this event, while “Notre Dame de Paris” remained close to its original form.
“I couldn’t believe when Luc Plamondon phoned me two-and-a-half years ago and asked me if I wanted to make an opera out of Starmania,” Leclerc said. 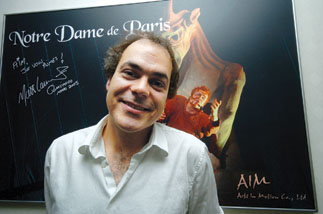 Simon Leclerc at the NDP Korea office in Gangnam, Seoul By Lee Ho-jeong

He said his first response was, “Are you kidding me?” He then told Plamondon that if “Starmania” was to be changed into a rock opera then the bass, guitar and synthesizer had to be taken out.
“I asked him, ‘Do you think I can make changes in the way I want?’ and he said ‘Yes’,” Leclerc said.
He said for “Starmania” he preserved the melody but changed everything around it.
“It needed a completely different approach,” Leclerc said.
For “Notre Dame de Paris,” Leclerc said it was perfect the way it was, since he had already worked on it extensively with the Montreal symphony four years ago. Leclerc said that by mixing opera with pop, the genre could be more accessible to the audience.
“Even though I love opera, I think it has to evolve,” he said. “I want an environment in which the audience will not be scared of opera.”
The Canadian conductor says the mix of opera and pop is an element different from the Broadway musicals that people are accustomed to.
“French musicals have more pop than with English musicals,” Leclerc said. “This seems to attract Korean musical fans.”
Leclerc was born in Montreal and sang in Les Petits Chanteurs du Mont Royal, a boys choir. He studied music at the Conservatoire de Musique de Montreal.
Leclerc has been studying music since he was 10. His favorite musical is “West Side Story.”