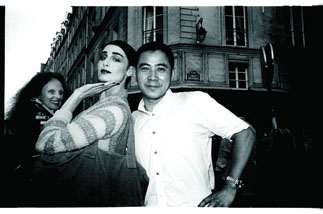 For Korean fashion photographer KT Kim, the work from his 14-year career ― be it fashion editorials, exhibitions or other books ― wasn’t enough to fully explain the story of his love for fashion.
Perhaps the former disc-jockey-turned photographer felt he needed his voice to be heard over his silent freeze frames. His inner voice was at last liberated through his new 432-page book, aptly titled “All That Fashion” (2007, Hainaim Publishing Co., 27,000 won, $29).
Pointing at the black-and-white photograph of a slender nymph gracing the book’s cover, Kim, 46, breaks into a broad smile and declares, “It’s Karolina Kurkova, you know, from the Chanel haute Couture show in Paris in 2004.”
Like images done by most travelling photojournalists, the photos in the book chronicle life’s fascinating encounters and capture moments critical to both the photographer and his editors. 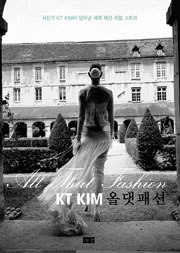 Kim’s book contains an image of Tom Ford backstage at a fashion show, where he gently tugs a model dressed only in a black thong. And it is that single shot in 2004 that triggered Tom Ford to woo the virtually unknown Korean photographer. Kim said two of his photographs are included in Tom Ford’s retrospective book.
To fashion enthusiasts everywhere, Kim’s book is a contemporary anthology of fashion’s who’s who.
Page after page, Kim’s lively photographs emanate the glamorous energy of fashion’s most powerful people.
That’s how Kim wanted to celebrate his personal success as a humble Korean man behind the camera.