Escada targets both mothers and daughters with high style

Escada targets both mothers and daughters with high style 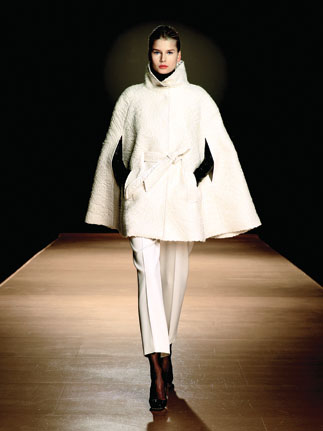 It was a day of couture at the Garden Place exhibition hall in downtown Seoul yesterday as a throng of the city’s most fashionable viewed Escada’s 2007 fall and winter collections inspired by the English actress Charlotte Rampling.
For discerning fans of Escada in Korea, Shin Mi, the chief executive of Escada Korea, opted for a museum-like display of clothes instead of runway events. The collections ranged from billowing capes to satin pant suits. It was Escada’s first collection since the brand’s new creative director Damiano Biella joined the firm.
With new bosses at the helm, Escada AG, a 31-year-old German luxury brand based in Munich, wants to grow younger. “Escada has been loved by mothers for years, and now their daughters and daughters-in-law can wear it too,” Shin said. “We’re known for high quality and classy style. Now we’re going to get trendier, younger and more contemporary.”
Thirty-six-year old Italian designer Biella replaced Brian Rennie last year. Before joining Escada, Biella was a studio director at Valentino for four years and worked at Carolina Herrera for five years.
The new direction for Escada was also set by its new chief executive, Jean-Marc Loubier, who replaced Frank Rheinboldt on June 1. Loubier, 51, worked at LVMH (Louis Vuitton Moet Hennessy) for 16 years, including 10 years as executive vice president of Louis Vuitton and six years as chief executive of Celine, a French fashion brand.
In Korea, Escada was one of the first foreign fashion boutiques to grace the Cheongdam-dong avenue in the late 1990s, when the Korean market was new to import luxury brands. Escada quickly grew to become a household name of luxury in Korean society. Shin of Escada Korea said the market share of most global fashion brands in Korea has remained extremely slim at about three percent, but with over 25 billion won ($27 million) in sales last year, Escada Korea accounts for six percent.
The success of Escada in Korea led Shin to take control of Escada Japan for four years from 2001 to 2005.
With the launch of Escada’s bridge line, Apriori, earlier this year, Escada Korea sells all of Escada’s four lines including Escada, Escada Sport and Laurel through 17 stores and eight duty-free stores nationwide.