[TV Review]A conversation about age has a serious side

[TV Review]A conversation about age has a serious side 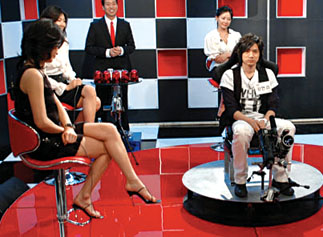 On a recent Friday night, I had no desire to discuss the future of Korea, but that was exactly what I ended up doing, after my boyfriend’s professor started asking me how I rate the hopefuls in the presidential election. Actually, that was not what the professor wanted either, as he planned the night to be a casual chitchat over beer. However, when he learned that I happen to be older than my boyfriend he felt under pressure to have a discussion suitable for adults over the age of 30.
I was not really happy to be reminded that I belong to a different age group than most of the gang that night, but I could not help but smile when the professor began calling me “Reporter Chun,” using a high-level honorific. The awkward conversation between Reporter Chun and Professor Kim continued, until a much younger girlfriend of another student stepped in. Abruptly changing the subject, the professor started to talk about the latest TV dramas and their stars. Well, I am no foreigner to television, but the professor apparently thought that people of different age groups should have separate topics of conversation.
Thus I was reminded again that age is more than a number when it comes to relationships. In many cases, when celebrities get engaged, what makes headlines is their age difference, such as: “Comedian Park is marrying a girl who is 11 years his junior.”
This obsession with age may explain why older women who date younger men attract so much attention. Maybe it’s because age difference still counts for too much. This focus on age has even led to the birth of a TV show, “Love Roulette: Older Women and Younger Men” on tvN, a cable channel.
Airing at midnight on Friday with reruns through the week, this show features a group of men in their early 20s and women in their early-to- mid 30s. Each episode eliminates at least one contestant from each group and the winning couple can chose between a prize of 20 million won ($21,568) or a relationship with each other. The women all have successful careers like financial consultant with hobbies like golf or playing jazz piano. But the men are either students or are not currently doing anything for a living.
In the show, the men and women play risque games like eating each end of a stick-shaped cookie, sometimes leading to kisses. Whenever a camera takes a shot of a man and a woman, the show likes to remind viewers of their age difference with subtitles like “Will this couple be able to overcome their eight-year age difference?” So viewers have no respite from the show’s central message that the combination of an older woman with a younger man is not normal.
There are more men on the show than women, so they are eliminated more often, and they are informed whether they will stay or not by opening their individual safe. If they have money inside, they stay on and if not, they are eliminated.
The men do their best, swearing love and fidelity to the women, but I could not help but wonder if the men are chasing the women or the money.
In a recent episode, a hidden camera in the men’s dorm showed them saying things like “The women are more like aunts to us,” “We are doing this only for the prize money” and “If you look closely, you can see the wrinkles around their eyes.”
The women later grilled the men and heard them say, “Uh, now I don’t see any wrinkles on your face. You look so young, ” or “I am not doing this for money. If I win the money, I will donate it to my church.”
Well, it would be great if this world could see the birth of another true love through this show, but I doubt it will happen. I wish age could be seen as nothing but a number, but that’s only true when a couple does not care about age. In the meantime, I should get ready for more serious discussions about the talents of the presidential candidates.