Potted plants have no place in these works

Potted plants have no place in these works

One of the functions of a pot is to grow plants; it is usually round in shape and the top is open so it can be filled with soil and seeds. However, from a slightly different perspective what if the top of the pot were closed? Would it lose its function? For Jean-Pierre Raynaud, 68, a French sculptor, the answer is no. In fact, for Raynaud, it becomes a form of art. The Columns gallery in Cheongdam-dong, southern Seoul, is holding a exhibition of Raynaud’s strange pots, titled “Le Pot Dore” (The Golden Pot).
Fourteen of Raynaud’s pots have been installed inside the gallery along with paintings such as Andy Warhol’s “Gold Marilyn Monroe.” Raynaud says the gold color of Manroe’s hair in the painting reflects the golden colored pot and creates a sense of unity. 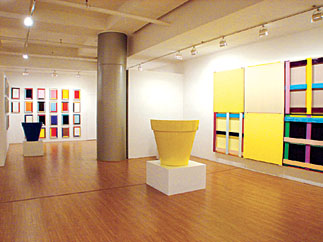 “Pot Jaune” with a painting in the background that matches the sculpture’s color.

These works are different in both size and color. Among the 14 pieces displayed the smallest is 17 centimeters in height and the biggest is 195. Primary colors are used such as yellow, red and blue along with gold, to symbolize simplicity and intensity. The way he uses colors is often reminiscent of Henri Mattisse.
It was in the 1960s that Raynaud first came up with the idea of transforming an ordinary object into art ― the approach was named Nouveau Realism by critics.
At a time when Raynaud was suffering from mental distress in the aftermath of his service during the Algerian War, he came across a flower pot in his garage. He filled the inside with cement (as an act of blocking all forms of life) and painted the outside with red paint.
The pots gradually became synonymous with Raynaud’s name and were displayed in prominent places, such as “Le Pot Dore” in the Forbidden City of Peking and “Pot Rouge” (Red Pot) at the Centre Pompidou in Paris.
Depending on where each pot is displayed, they elicit different emotions and reactions from viewers. 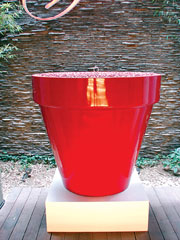 “Pot Rouge,” which is 195 centimeters tall. This pot is displayed at the entrance to the gallery. Provided by the organizer

“Since last year, I have been collecting Raynaud’s works,” says Chang Dong-jo, the director of The Columns gallery. He added, “A pot is about as ordinary as anything can be, because we use them in our everyday lives. However, Raynaud does not refer to the superficial layer, but to the spirituality and inner strength of human existence that can be seen from the pots.”


The exhibition “Le Pot Dore” is taking place at The Columns gallery located in Cheongdam-dong (Cheongdam Station, line No. 7, exit 9) until mid-July. For information, call (02) 3442-6301 or visit www.columns.co.kr.