His images capture the famous but he lives for the everyday

His images capture the famous but he lives for the everyday 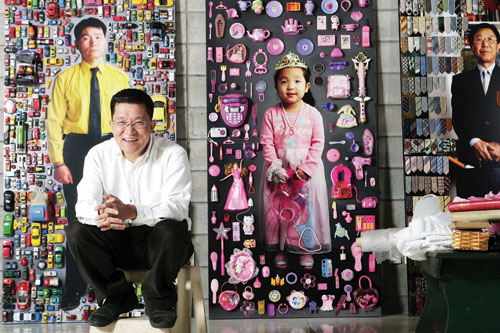 Photographer Park Ki-ho pointed to a life-size photo of a taxi driver in uniform. The driver is surrounded by clusters of mini toy taxies, looking like they are about to engulf his entire body.
“This work is called ‘Rush Hour’ ― I lived in the United States for 20 years and came back to Korea in 1987,” said Park. “I had no particular desire for America’s big houses or cars but I felt suffocated by the air in Seoul.”
Like his views on the places where he has lived, Park’s works are direct and literal. There is nothing random about the way he introduces his subjects to viewers.
However, amidst this directness there is an interesting contradiction. Park, who worked as a freelance photojournalist for nearly 20 years ― his photos appearing on the cover of major international publications including Time, Fortune, Forbes and Business Week ― had his first solo exhibition this May. In the exhibition, held at Seoul’s White Wall Gallery, Park showed around 30 photographs, the majority of them of ordinary Seoul citizens including the taxi driver, a factory worker and his daughter. If visitors weren’t aware of his previous works there was nothing in the exhibition to suggest he had once been a prominent photojournalist who captured defining images of everyone from former president Kim Dae-jung and Samsung chairman Lee Kun-hee to actor Jang Dong-gun and soccer star Ahn Jung-hwan. 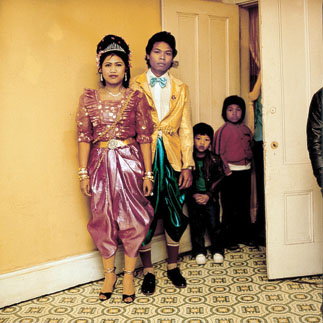 “Many photographers these days either work with really famous people or lean to the other extreme and take photos of orphans, mixed race people or cancer patients,” said Park. “I just felt that somebody should document the kind of everyday people one can see on any street corner.”
Park points to his father, painter Park Ko-suk, as an influence on his choosing a creative field in which to work. The photographer was born in Seoul in 1960, he went to the United States in his early teens and enrolled at the University of Maryland as a marketing major. It was then that Park decided he was more passionate about photography than economics. He transferred to a photography course at the Rhode Island School of Design.
During his university years, he decided to use his minority status in a creative way, taking photographs of Cambodian refugees who lived near his dorm (which were later featured in an exhibition). “Their [the Cambodian refugees,] efforts to try to fit into American society felt very unnatural,” he said. “Maybe because I am Asian, I felt like I could empathize with their situation.”
In 1987, he returned to Seoul as a photojournalist for Newsweek magazine. “Over these 20 years, I’ve done everything,” he said. “I’ve photographed homeless people. I’ve gone to North Korea and met the top economic and political brains of our times. I think this, being able to have these outrageous experiences, is the privilege that photojournalists have. But it is quite boring for me to shoot these famous faces. I think one of the most important elements of documentary photography is being able to relate to one’s subject. In this sense, everyday people, like the ajumma in Namdaemun who delivers lunch to the merchants, carry a stronger message about life.” 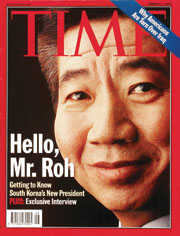 He explained his reason for creating “Autumn Leaves,” a photograph featuring a street cleaner with real foliage glued to the digital print.
“I read in a paper one day about street cleaners in the Nowon district, who cleaned the leaves on the street to earn money so they could donate scholarships to students in need. I realized for the first time how precious leaves are,” he said.
All of the works Park featured in his exhibition are two-dimensional photographs covered with some sort of item, turning them into 3-D objects in a way that reinforces the theme of each photograph. And they also seem to hint at his new interest in 3-D imagery ― mainly sculpture. Park said he plans to go to the United States again in a few months to study sculpture.
“I am beginning to feel that two-dimensional spaces are too limited. My ideas about space and time feel quite constrained within a flat space. Although my day job is photography ― I still have to eat,” he laughs. “But I want to expand my horizons.”