The secret of a children’s bestseller

The secret of a children’s bestseller 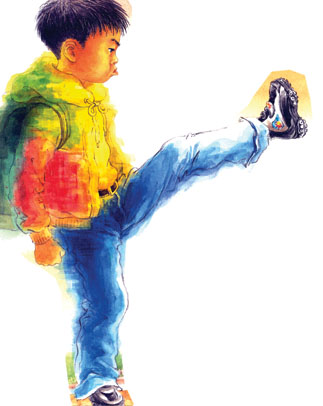 “When we first released this book, I had no idea it would make so much money,” said Hwang Seon-mi, author of “Naughty Children,” which recently went through its 100th reprinting. “I thought authors usually saved up money by doing other jobs and then released their book, and then saved up again to release another book. I really thought that is how they live.”
“Naughty Children” is often picked as a must-read book for elementary school children and it has sold over 600,000 copies since it was published in December 1999. “With the success of this book, I had the financial capacity to pursue my studies, buy a house and pay for my children’s supplementary tuition.”
Hwang celebrated the book’s 100th reprinting last Saturday at a Korean restaurant in Insa-dong, along with 30 others, including fellow female children’s authors Lee Sang-gyo, Kim Hyang-i, Kim Su-jeong, Kim Seon-hui, Wohn Yu-sun and Kim Hyeon-sook, as well as the illustrator Kim Se-hyeon and children’s book critics Wohn Jong-chan, Cho Won-rae and Kim Sang-uk.
In Korean publishing, a 100th reprinting is a rare stamp of approval. It shows that a book is not just a fleeting best seller, but has staying power. Books which have gone through the 100 mark include modern Korean classics like “Arirang” and “The Taebaek Mountains” by Cho Jeong-rae, “Salmon” by Ahn Do-yeon, “Open Space” by Choi In-hoon, “The Land” by Park Gyeong-ri and “Your Paradise” by Lee Chung-joon. Cho Se-hui’s “A Dwarf Launches a Little Ball” was reprinted 200 times. All these books achieved steady popularity over several years, something which trendy best sellers or heavily-marketed books often fail to do.
Hwang gave a speech that had few literary pretensions, but the atmosphere was still quite serious. There were many questions in the air ― especially the issue of whether or not Korean children’s books, which until the 1980s were treated as second-rate compared to foreign translations, could celebrate a new era. With “Naughty Children” leading the pack, can Korea anticipate a blockbuster era for children’s books?

The force of “mother” authors
In the mid-1990s, Korean children’s books entered a new phase in which women authors produced many of the biggest hits. Previously Korean children’s books had mostly been written by male authors. They usually produced stories about underprivileged children who had been rejected and discriminated against in Korean society. Major works from this period include Hyeon Duk’s “The Father who Caught Butterflies,” “Rabbit and Monkey” by Ma Hae-song and Gwon Jeong-saeng’s “Mongsil Unni.”
In contrast to these books, the strength of the “mother” authors lay in their sharp observation combined with the direct experience of being a mother. These authors were able to portray the psyche of children through everyday experiences, much as Hwang did in “Naughty Children.” Hwang said the book was inspired by her son’s antics when he was in fourth grade. Other works, including Hwang’s “The Day I Hid My Diary,” Wohn Yu-soon’s “Illiterate Samdigi,” “Eugene and Eugene” by Lee Geum-i and Chae In-seon’s “My Best Friend Choi Young-dae” were all in this category, portraying the everyday lives of children at home and in school.
However, despite this success, there are some who say that if the mother-writer trend continues it will lead to a narrowing in the range of subjects found in Korean children’s books. “These books will face their own limits by portraying only the everyday circumstances of life,” said critic Wohn Jong-chan, a professor in the Korean language department at Inha University. “They fail to paint a diverse and broad picture of the world for their readers.”

The influence of the 386 generation
The conventional wisdom in the publishing world concerning this shift in the type of authors and style of children’s books is that the 386 generation (those who were born in the 1960s and attended university in the 1980s amid the nation’s democratic movement and political reformation) grew up reading social-science books in the 1970s and 1980s and this influenced their perception of children’s books. Thus, this generation didn’t stop at merely recommending books to their children. They were involved in choosing what books were read by their children and their friends’ children. Since 1993, the Child Book Organization has put out a “recommended reading” list for each grade. This has proved to be influential and many of those listed went straight on to the best-seller charts in bookstores.
In this century, the Internet bookstore has become a new force to be reckoned with. As reviews by readers and book rankings became available to the public with a click of the mouse, the publishing world has entered an era of the rich getting richer and the poor getting poorer.
“Currently, the children’s book/illustration book market is dominated by steady sellers,” said Han Gi-ho, the chief manager at Korean Publishing and Marketing Research. “Although this is good in some respects, there are negative sides as well, in that it is more difficult for new books to survive, thus creating an atmosphere in which diversity and creativity are constrained.”