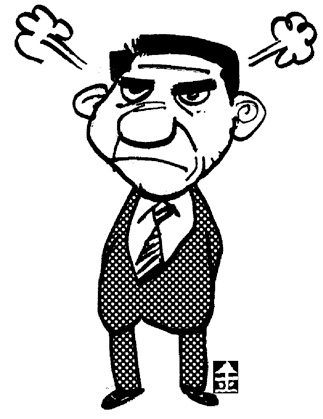 In the reign of Emperor Kuangwu during the Han Dynasty of China, there was a person named Dong-seon. Of the countless Chinese sayings coming from anecdotes or stories, few are about the neck. But Dong-seon is the subject of an anecdote about his neck.
At the age of 69, he was appointed as the head of the capital Luoyang. Back then, many officials did not want to take that job because the emperor, his family and relatives, and high officials and their families lived there, and it was hard to control them.
After he was appointed mayor, the first incident he encountered involved Princess Hoyang, an elder sister of the emperor. One of her slaves committed murder, but the princess covered up his crime. So Dong-seon had his men wait around her house in ambush. When the princess came out of the main entrance, the murderer led her into the street. Dong-seon immediately came close and arrested him.
Feeling humiliated, the princess reported the incident to the emperor. The emperor attempted to kill Dong-seon, saying his authority had not been duly respected. Dong-seon was arrested but he protested. Yet, even the emperor could not kill an official who said everybody must abide by the law. So he told the mayor to make an apology to the princess and ordered him to kowtow.
Dong-seon, however, refused, saying, “I won’t kowtow, no matter what.” The emperor’s bodyguards tried to lower his head by force, but he refused till the end. The emperor finally gave up, saying, “You have a very stiff neck, indeed,” and released him.
This is a story in Houhanshu, the history of the Later Han Dynasty. Dong-seon completed his duties as the head of Luoyang with his integrity intact. The people praised him, saying, “As long as Dong-seon governs us we do not need a special drum to report injustice committed by the emperor’s officials.”
This story reminds us of President Roh Moo-hyun, with its reference to a stiff neck. Despite repeated warnings from the National Election Commission, the president did not lower his head, asking a rhetorical question, “Do they mean that the president must not carry out political activities at all?” He is similar to Dong-seon because both refused to lower their heads.
The difference is that Dong-seon resisted because he wanted to abide by the law, while the president does so in order not to follow norms. Even a close aide to the president stepped up and protested, saying, “The president, the head of the country, received warnings.” The president and his men really are a stiff-necked lot.