All the president’s men

All the president’s men 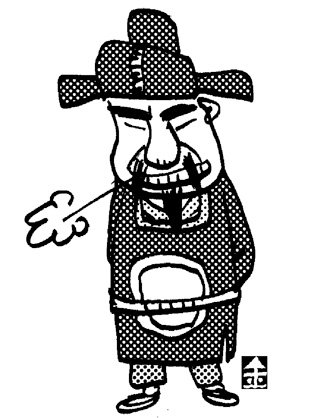 For loyal retainers, private integrity means more than public relationship. “Kanadehon Chushingura,” a performance in traditional Japanese theater, reveals the nature of loyal retainers. In the story, 47 samurais track down their lord’s killer and take revenge upon him. It is a tragic ending, but only vengeance prevails. There is no room for a reasonable judgement.
In the early Goguryeo Dynasty, where a tribal federation existed, daega, the tribal leaders, led their retainers. Those daega were merged into the royal authority as the king gained power. However, in the late Goryeo Dynasty, the military junta gained more power than the monarch and ruled the nation. The followers of the military leader were called loyal retainers.
In the three Kims’ era in South Korea, loyal retainers again became rampant. It was somewhat understandable because the three Kims had been struggling against a stubborn military junta. However, when they took over, those retainers ruined state affairs.
During the Kim Dae-jung government, Gwon Roh-gap, a top aide, performed his power without even having an official post.
“Who cares about a title when the whole country knows me,” he said. His name carried more weight than the prime minister’s.
Lee Byung-wan, President Roh’s former chief of staff, once bragged that the term “loyal retainers” has disappeared under the Roh administration.
A couple of days ago, however, Ahn Hee-jung, a close confidant of the president, uttered very different words. He defined the president as “the king of the nation and the head of a family.” If the president is the king, the president’s close aides become, no doubt, the loyal retainers.
Five years ago today, then-president Kim Dae-jung asked the people for a pardon after two of his sons were jailed. It was when he was a lame duck. Compared to those days, President Roh seems to manage the tough time of his term quite well. However, we must wait and see what is coming at the end.
Lord Mengchang of the state of Qi in ancient China survived countless crises thanks to his loyal retainers’ sacrifices. By gathering his retainers under the banner of the Participatory Government Evaluation Forum, our president might have tried to imitate Lord Mengchang’s skill in escaping from deadlock with the help of retainers. But Roh’s efforts won’t amount to more than the efforts of a meager craftsman trying to gather his vassals. It is wiser and more righteous to follow public opinion and listen to the people.