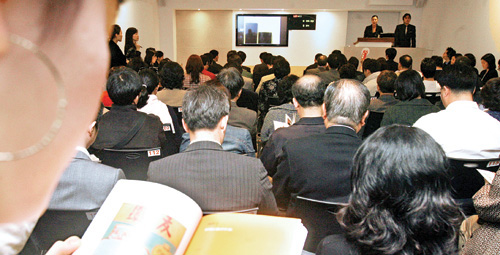 Equipped with professional careers, higher education and purchasing power, Korea’s new emerging middle class is now consuming art.
According to Seoul Auction and K Auction, the two biggest auction houses specializing in art trading in Korea, the sum of art sales was estimated at 53.6 billion won ($57.8 million) in 2006, up from 24.9 billion won in 2005.
Total transactions for 2007 are expected to top 10 billion won.
A work by one of the most well known Korean painters, Park Su-geun, sold for a record 4.5 billion won this year.
The art market has two very different sides, but both involve plenty of speculation. Auction houses dominate the high end of the market. Recently at K Auction, the crowd eagerly awaiting bidding.
“This is a drawing by Park Su-geun, ‘Woman at a Market,’ shouted the auctioneer. “Starting from 56 million won, bidding moves to 2 million won. Anyone for a bid?”
After the auctioneer’s shouting, numbered paddles were raised to bid on the drawing. After the competition, the work was sold in two minutes at 2.5 billion won, the highest price for a drawing.
The crowd at Sagan-dong, Seoul, even overflowed downstairs, regulated to viewing the auction on a monitoring screen. Most people just sat recording bid prices and the final sale price of the art works. Park Su-geun’s “Washing Place” fetched 4.5 billion won in May, breaking records.
At the bottom end of the market, the activity is just as frenetic, but with even more people buying.
At Ssamji Art Mart in Insa-dong, art sold from 10,000 won to one million won on June 16.
While more than 1,000 people visited the mart, one prospective buyer picked up a painting, speculating on the work’s future potential as an asset.
Yang Ok-gum, the curator of the gallery said, “The gallery is crowded with more people, especially on weekends. This year, more customers are showing interest in buying art as an investment.”
Ever since Goodmorning Shinhan introduced Seoul Masterpiece Art Fund in the market in September of last year, art funds have been increasing in popularity among investors.
Individuals also are investing in art on a small scale.
Kim Hyo-ran, 50, said, “After buying a painting for 1 million won, my friends and I sold it at a higher price, and then shared the dividends.”
The new trend focusing on art as an asset is becoming popular, especially among people in their 40s. Kim Soon-eung at the K Auction said that investing in art for profit is a common phenomenon in developed societies where the GNP is over $20,000.
Park Seung-hee, 43, runs his own business.
“It is surprising that my friends and I have started to talk about art recently,” Park said.
Regarding the recent phenomena, some worry that there could be a bubble in the art market.
Seo Jin-soo, the director of Art Market, said, “Because of low interest rates and government regulations on real estate, money flows to the art market.”
Since art transactions are free from acquisition or donation tax, fine art is regarded as a good alternative for investment. 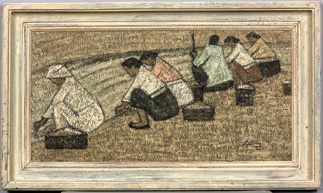 Kim has been collecting art for 17 years. He saw that a poor quality painting sold for 30 million won through an auction.
Middle-class people interested in art investment take art lessons provided by banks, department stores or galleries to learn art appreciation.
A recent Art Business Course at Gana Art Center was fully booked long before opening in spite of a rather expensive fee (400,000 won for 8 lessons), and the center had to open more classes.
One person at the center said, “More than half of the students enrolled in the course are individual art investors.”
What about tips for art investment? Like any kind of investment, it’s an information game, experts say. You’ve got to educate yourself.
Beginners in art investment mostly worry about possible money loss since they lack experience and knowledge.
Jo Myeong-gye, a professor at Joongang University, recommends study and patience.
Jo also said potential investors need to get out in the field and see art with their own eyes.
Seo Jin-soo, a director at Art Market, warned beginners of the potential risk in art investment.
“Beginners can fail to make a profit in art investment if they know nothing but the name of artist,” Joo said. “If you encounter a well-known artist’s work at an extremely low price, you had better suspect its quality ― it might be in poor condition.
“In addition, art is far less liquid than stocks or real estate. It might be easy for you to buy a piece of art, but actually rather difficult to resell it. And you also have to compile personal data on your own since there is little reliable information provided by public agencies at this time.”
An executive director of Korea Art Investment, Lee In-hong, said that art performs well as an asset over time.
But he also said the art market is too small, especially when compared to real estate or the Korean stock market, now enjoying a record bull run.
“Some investors made huge profit on a one-time transaction, but the market for individual dealers with limited capital is very small in Korea,” Lee said.
“Investors should not expect to earn much profit in just one or two years.”
According to Kim Soon-eung, a representative of K Auction, the early work of a master artist may cost as much as one-month’s worth wages of a middle class worker.
Kim said a good way to start in the art investment universe is to start small, seek the work of lesser known artists, and build your art knowledge step by step.
Kim gave an example of the variables found in art investment.
“Four years ago one collector spent 80 billion won to buy paintings in bulk. He asked me to sell his collection. But unfortunately they sold for no more than 200 million won.”
“Like blue-chip stock and real estate, safety and stability are important values for art investment, ” Kim said.