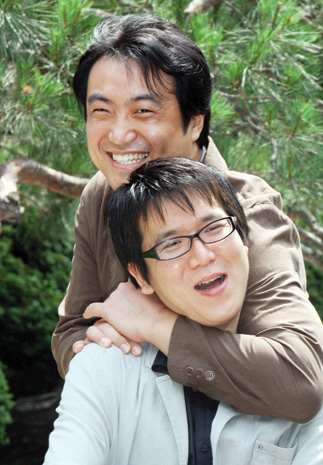 The top two musicals on fire right now in Daehangno, central Seoul, are “First Love” and “The Spitfire Grill.”
These two shows are produced by Shownote Company, the production group behind the hit musical “Hedwig.”
Working behind the scenes at Shownote are head director Kim Young-wook, 36, and production director Lim Yang-hyuk, 39.
In August 2005 Kim and Lim created the company together. Each bring something unique to the team.
“I studied engineering at first, but I found it boring,” says Kim.
“I always dreamed of my hobby becoming a career in the long run.”
That passion is what made Kim end up studying physical education instead of engineering.
“I loved to watch and play sports,” Kim said.
After graduating in 1996, Kim began working at a sports medical center in a hospital. His duty was to provide rehabilitation treatment. However, he found it to be banal, so in 1999 he pursued a different field ― public performances.
Working at various production and entertainment companies, such as SJ and Sambu, he eventually worked his way up to the stage of creating his own company, Shownote.
Unlike Kim, Lim has studied abroad. After graduating from the department of Composition at Seoul National University, he received a doctorate from Columbia University in New York. By the time Lim returned to Korea in 2003, he had been scouted by a production company and worked for the overseas division. That is when Lim first encountered Daehangno. 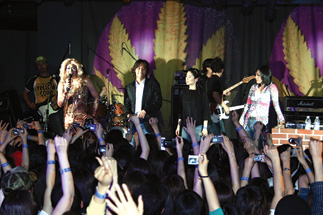 The crowd cheers at a “Hedwig” party. [JoongAng Ilbo]

Within the company, Kim is in charge of marketing, investing and booking contracts. Lim handles relationships with other creative companies.
That includes producing, playwriting and composing. The arrangement is similar to that of PMC Production, where producer Song Seung-whan and marketer Lee Kwang-ho also share the workload.
Shownote also produces concerts and plays. Since it was founded in 2005, Shownote has held concerts for musicians like Lena Park, Jawoorim, 015B and Roller Coaster. Moreover, it has staged successful plays, such as “The Vagina Monologues,” “The Good Body” and “Graduation.”
Shownote is the only production company in Korea that deals with musicals, plays and concerts at the same time.
“All three genres need a high level of technique,” says Kim.
“Apart from the digital factors, basic emotion is also needed to communicate with the audience,” he said, referring to the necessity of maintaining traditional elements. I don’t want to lose even one member.”
By October of next year, Shownote is planning to produce a musical form of “200 Pound Beauty,” a Korean movie seen by 6 million viewers.
At first, a prominent production company tried to obtain the copyright of the movie as a musical, but the film company decided to partner with a smaller production company, Shownote.
“The most important thing is density,” says Lim.
“I don’t want the work to have awkward singing or dancing. Everything must be articulately connected.”
He added that the musical of “200 Hundred Pound Beauty” would take a new approach to the story.