[DVD Review]Restless to watch something better

[DVD Review]Restless to watch something better 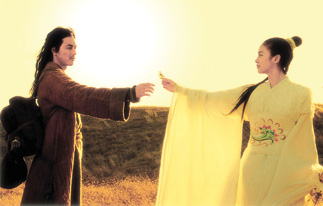 “The Restless” is a costly reminder that it takes more than top-notch computer graphics and good-looking actors to make a quality fantasy film. All that remains after 102 minutes is the memory of how handsome the actors looked in perfectly staged action sequences generated by computer graphics. Forget the storyline ― it exists only to give the action sequences a chance to shine.
It’s not all that bad to see the dazzling smile of actress Kim Tae-hee as she flies with her feathered sword and shoots peach blossoms at her enemies. Viewers are still left with questions about how lead actor Jung Woo-sung could dispatch so many ogres when his face was covered by his stylish hair and he was wearing an extremely long robe.
There is no doubt that the two lead actors look fabulous. Yet, the visual glamour is the only aspect of this film that endures, along with the knowledge that it was a flop at the box office.
Director Cho Dong-ho made his debut with this film and he aimed to make “the best Korean-style fantasy film using only Korean computer graphics.” Fantasy is indeed a field that is relatively rare for Korean filmmakers and Cho’s approach attracted high expectations. He attracted a budget of 13 billion won ($14 million), which he mostly spent to glam up the film by using computers.
Cho first wanted the film to become a trilogy like the “Lord of the Rings” but had to give up under the pressure of budget constraints. It’s a good thing that the producers persuaded him to drop the trilogy idea. If only the director had then paid more attention to the structure of the storyline.
In the film, Yi Gwak (Jung) fights ghosts and ogres and one day he happens to fall into “mid-heaven,” a place where dead souls remain for 49 days after their death before they go to either heaven or hell. There he meets the deceased love of his life, Yon-hwa (Kim), who has turned into a heavenly figure after her untimely demise. In mid-heaven she has a different name, So-hwa, and no memories of Yi Gwak. She also has no human feelings.
Carrying a holy stone that can open the border between the world and the heaven, she is harassed by a group of dead warriors who want the holy stone to change the world. Yi Gwak tags along to protect her, until he happens to find out that the dead warriors were his comrades in life. In the meantime, despite the premise that So-hwa is now a heavenly creature without human feelings, she comes to love Yi Gwak.
There is no chain of logic offered so that viewers can understand why Yi Gwak fell into mid-heaven in the first place and why So-hwa develops feelings for him.
However, the director does not seem to care about logic or the need to develop a good story, as long as his characters have the opportunity to shine in action sequences.
The film has action and fantasy in abundance, but that does not mean the director can concoct any story he wants to without regard to logic. As a bonus, characters get the opportunity to murmur cliched lines like “Love can change this world” and “I will never forget you” at the moment when they die.
You may think that this reviewer is too cruel and should have some mercy on the film’s ambitions, but I am not alone as the film was not even a commercial success. Some 1.4 million viewers paid for tickets, and they must have been fans of the two leading actors.
To cover the budget, at least 4 million people had to buy tickets for the film.
In its DVD release, you may want to focus not on the film itself but on the special features which offer details about the computer graphics. That is if you are ever tempted to rent this DVD, which I would not recommend.