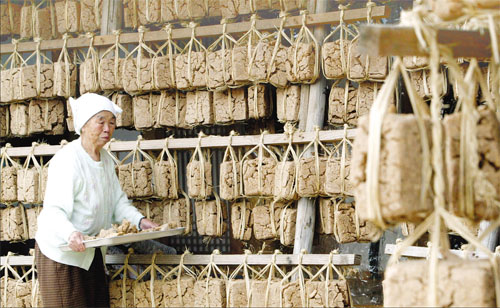 North Koreans refer to cheonggukjang (fermented soybean) as sseokjang, meaning rotten sauce (sseok means rotten and jang means fermented sauce), but despite this pejorative title, Koreans say that jang has been like a dutiful son for centuries. In fact, the majority of Korean cuisine depends upon some form of jang for its distinctive taste.
Besides its position in the food culture, jang has been an important aspect of the Korean economy. In 2004, the Korea Foods Industry Association reported that Korea produced a total of 94,064 tons of doenjang (fermented soybean paste) alone, making 94.4 billion won ($102 million) worth of profit in Korea.
In many parts of the country, local businesses are grateful to jang. Lee Wan-bae, the president of the Tongilchon Bean Association, has created a large-scale business based on growing Korea’s “luxury beans” and making jang with fellow farmers.
“The beans that are grown and harvested in Tongilchon are regarded as the best in Korea,” said Lee. “Every year, our village is packed with tourists all wanting a taste of the area’s jang. Our bean farmers make a good living.” 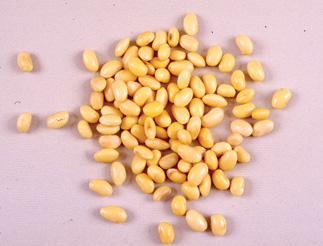 Ripe Korean beans are harvested during the fall and washed to prep them for making jang.

Lee’s organization, founded in December 1995, is one of the first business ventures created by local farmers to concentrate on traditional jang. It started out with five people making meju (blocks of fermented soybeans) from an annual harvest of ten bags of beans. The organization has grown so that it now makes and manufactures meju and jang on a large scale (they even sell through the Internet at www.tongilchon.co.kr), but their village is a hot destination for tourists as it includes restaurants that serve up food to compliment their jang. “We make all our meju from the beans that are harvested here,” he said. They take special precautions in preparing all the ingredients that go into jang-making. For example, the salt used in their jang is bought from Jebu Island, known for the high quality of its sun-dried salt.
All bean-based jang originates from meju. With the exception of gochujang (made with peppers), doenjang, cheonggukjang and soy sauce all come from beans. After beans have harvested during late autumn, they are boiled and made into squares and kept at a warm temperature until they grow mold. Afterwards, they are dried. 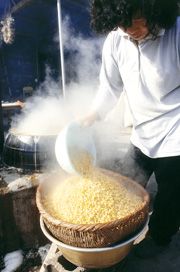 After being washed, the beans are boiled.

Lee explained that the area’s clean water and air are what make its bean-based products so exceptional. Lee Chun-ja, author of “Jang” and a professor at the Department of Food and Nutrition at Hanyang Women’s University also emphasizes the importance of sanitary conditions and climate in the production of jang. “The key word for jang-making is bacteria. For the right kind of bacteria to grow, the meju needs to be looked after. Even if you use the best beans in the world, if the jang is not fermented properly, it will go to waste,” she said.
After the meju has been dried, it is then put inside a large jar with salt water. The broth is later used to make soy sauce and the solids are fermented further and made into doenjang.
“We harvest our beans during November. It’s very important to ferment them at just the right time. If you ferment meju for too long the soy sauce will taste great, but the doenjang will not. So to make both the soy sauce and doenjang taste wonderful, the meju must not be overly fermented,” said Lee.
Cheonggukjang is made with freshly fermented beans which have been preserved for two to three days. It is usually eaten as a hot soup and contains protein, linoleic acid, lecithin and isoflavin, and helps to maintain healthy brain cells as well as aiding digestion and diminishing the risk of cancer. In particular, cheonggukjang (similar to natto in Japan) is reported to be one of the healthiest ways to ingest beans because of its bacillus subtilis, which is known to help prevent high blood pressure, obesity and cancer.
The Korean Society of Cancer Prevention recently released a book titled “54 Korean Foods which Help Prevent Cancer,” which states that cheonggukjang helps the body resist cancer. along with other foods including kimchi, ginseng and sweet potatoes. 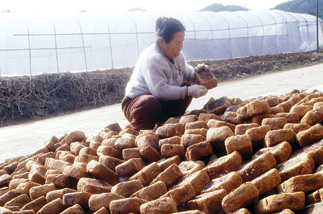 Boiled beans are mashed and shaped into square blocks of meju.

Last year research was done by a team from Pusan International University, led by professor Park Geon-yeong, which released data stating that, through experimentation with laboratory rats, it was found that doenjang is the most effective for reducing body fat, followed by cheonggukjang and gochujang.
“Jang, especially bean-based jang, is one of the healthiest foods we can consume today,” said Lee Chun-ja. “The important thing for today’s scientists is to lower the sodium content in Korean jang and make cheonggukjang less smelly so this food can develop a broader international appeal.”
The definition of jang, in the narrowest sense of the word, is “soy sauce.” Today, the word is used with a broader meaning to take in all the fermented Korean sauces, such as soy, doenjang, cheonggukjang and gochujang (hot pepper paste).
The word jang first appeared in the “Jurye,” an ancient Chinese text, although, in this book, jang refers to a meat-based sauce instead of fermented bean sauce.
Vegetable-based jang began to appear in Korea during the mid-Neolithic Age when the Han race, which had originally been nomadic with a carnivorous diet, began to develop into an agrarian society. With a diet centered on grains and vegetables, they needed the protein and fat in the beans to survive. Jang also served as a common home remedy. Soy sauce or doenjang was used to cure bee and snake stings as well as light bruises or scratches. To cure indigestion, people ate doenjang. 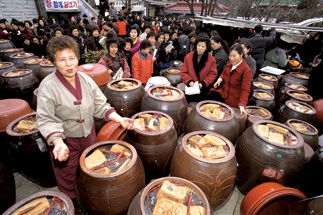 After being dried and fermented in jars, the broth is used to make soy sauce and the blocks are made into doenjang. [JoongAng Ilbo]

The first traces of cultivated beans in Korea can be found in the country’s Bronze Age. At that time, beans were consumed after being boiled or steamed. Although the exact date of jang’s birth is unknown, most experts agree that it was common by the 3rd century, at which time a document called “Samguksagi (History of the Three Kingdoms)” reveals that Goguryu people made jang. By the Joseon period, the recipes for jang had diversified, with numerous descriptions of Koreans making soy sauce, doenjang and meat-based jang.
Just as important as the jang itself, the day when the jang is prepared is significant for Koreans. The annual ritual was a private affair and, on that day, no member of the family was allowed to go out and visitors were not allowed inside the house. Ablutions were performed and a small table with salt, meju and dried peppers were offered as a sacrifice to the spirits.
These customs, especially the cleansing, were believed to determine the overall quality of the jang, as the bacteria inside the jang are extremely sensitive to air, water, temperature and the degree of sanitation. The taste, therefore, varied greatly from house to house, region to region. “All mejus are different, because the bacteria inside them vary depending on the degree of difference in temperature, or the degree of cleanliness of those making the sauce,” said Lee Chun-ja. “All fermented foods are greatly influenced by their environment and by nature.”

Thus there were differences between the jang made for the royal family, and the jang made by commoners. For one, in the palace, doenjang and gochujang were hardly ever used in their meals. As a result, soy sauce destined for the most important jang was prepared with the utmost caution. Particularly during the late Joseon dynasty, King Gojong and Seonjong are recorded as having a strong aversions to spicy or salty food. Records state that they only ate very small portions of doenjang soup once or twice a year.
There was also a tradition during the late Joseon dynasty of drinking meju broth, prepared by mixing bits of meju with salt water. This concoction, called mujang, was usually drunk on the last day of the lunar calendar, to fight off evil spirits for the new year.
Today, jang, cheonggukjang in particular, enjoys a new image and more creative marketing.
One item to score big during recent years is NUC Electronic’s cheonggukjang maker, a kitchen appliance which can turn boiled beans into cheonggukjang and milk into yogurt in eight hours. The machine was launched via a TV home shopping channel program in 2003 and sold 2,200 units during its first sales period. Even today, it sells an average of 2,000 per program.

Another jang product is Renewal Life Corporation’s dried cheonggukjang named “When Cheonggukjang Meets a Pastry Chef.” The dried cheonggukjang is covered in substances like chocolate or green tea powder, thus eliminating the smell and strong taste of cheonggukjang. The witty packaging and concept attracted younger people to give cheonggukjang a try.
“Seoul National University has been making doenjang tea that doesn’t smell like doenjang but has the nutrients of the jang. Although Japanese natto has been marketed on a wider scale, cheonggukjang and doenjang are now doing quite well overseas. In terms of internationalizing jang, I think Korea is on its way,” said Lee Chun-ja.