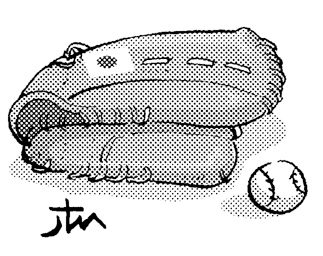 In Mizuno headquarters, a sports supply shop in Osaka Japan, a special order was received in 2005. The object delivered to the shop was an antique-looking baseball glove whose worn-out leather had turned black. The letters R.R. Mizuno were engraved on the back. These were the initials of the company’s founders, Rihachi and Rizo Mizuno.
The client was Thomas Schieffer, the U.S. ambassador to Japan. The glove was believed to have been used by the legendary champion batter Lou Gehrig during his major league days. He was the number four hitter for the New York Yankees and a baseball Triple Crown winner in the 1930s, until his career was cut tragically short by amyotrophic lateral sclerosis, also known as ALS, now commonly referred to as Lou Gehrig’s Disease.
According to research done by the Mizuno company, it was found that Lou Gehrig announced that he would use Mizuno gloves beginning the next season when he visited Japan in 1931.
So Ambassador Schieffer’s words were proved to be true. The fact that the major hitter used a Japanese item rather than his own country’s is a proud thing that proves Mizuno’s history and technology. The Mizuno company, which has celebrated its 100th anniversary, is now selling gloves all over the world.
However, as far as history goes, Mizuno cannot boast in Japan. There are many companies with histories longer than 300 years. Kongo Gumi Co. Ltd. is a 1,400 years old, the world’s oldest operating construction company. It went through some hard times when it tried to expand its business to concrete construction, but returned to its main business, constructing temples. The record states that the founder was a technician from the Baekjae Dynasty in the Nihon Shoki, or “Chronicle of Japan.” In Japan there are over 15,000 companies with histories over 100 years old. This number excludes privately owned shops.
According to the Japanese Academy of Practical Business Administration, there are over 3,000 companies with 200-year histories. In China there are only nine, in Taiwan seven, and only three in India. Even in Europe, the heart of capitalism, there are 800 companies with over 200-year histories in Germany and about 200 in the Netherlands. In Korea, Doosan is the oldest company, which celebrated its 110th anniversary last year.
What is the secret that enables companies to last for over 100 and 200 years? The answer is continuous innovation using a company’s merits, yet, not rushing things. That was what Japanese companies unanimously reported in a survey.