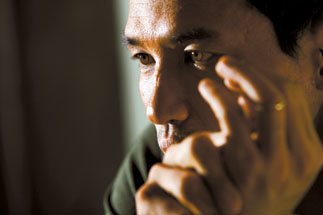 When Hwang Jung-min, 38, accepted the best actor award at the Blue Dragon Film Festival for his performance in “You’re My Sunshine” many were moved when he said: “All I did was add a spoon to a dinner table that had already been prepared by others.”
This summer Hwang is back with a different kind of film, designed to scare and horrify , as he stars in the thriller “Psychopath,” directed by Shin Tae-ra.
The film, which will be released tomorrow, is based on a novel by Japanese author Yusuke Kishi. Hwang plays Chun Jun-oh, who works for an insurance company and fights against a psychopath while investigating the mysterious suicide of a 7-year-old boy.
The JoongAng Ilbo met with Hwang to get an insider’s look at the film.
“I always wondered why Korea has no movies like ‘Dressed to Kill,’ ‘The Silence of the Lambs,’ or ‘Seven,’” said Hwang. “On a hot summer’s day, people want movies like these to give them a chill but, until now, Korean films weren’t able to do this.”
However, while making his first thriller, Hwang understood why there are few Korean films of this type. “This genre of film is one that needs to be accurate in depicting emotions.” 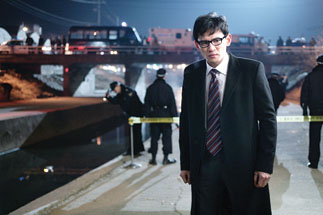 Hwang said that it is difficult for viewers to absorb every aspect of the emotions that the film originally intended to deliver. “The goal is for my acting to make people shudder and feel a chill in the very marrow of their bones,” said Hwang.
Given the responsibility of chilling the viewers, filming was not easy. “Confronting the psychopath for the first time, I had to act as if my blood vessels were going to burst,” said Hwang.
When asked about the character Chun, Hwang says, “He is not very attractive; he doesn’t strike people at first. However, he has the power to make viewers react instantly to the horrific scenes.
“Besides, when I select scenarios, I look at the overall storyline rather than the character itself,” said Hwang. He said that he even imagined acting as a passerby in the movie “Billy Elliot.”
Hidden behind this character is Hwang’s effort to continuously bring out the character’s inner workings.
“When shooting a scene on a roller coaster ride, I imagined that the viewer was sitting right next to me,” said Hwang. “It would be wrong if only I, Chun, was terrified and the person next to me was not.”
Starring in various musicals and plays in Daehangno including “Subway Line No. 1” in 1994, Hwang’s debut film was “The Waikiki Brothers,” in 2001. Then he appeared in prominent films like “A Good Lawyer’s Wife,” “You’re My Sunshine,” and “Bloody Tie,” all of which required him to play diverse characters.
“It is very important that you don’t get too absorbed in yourself,” said Hwang. “You must always remember that there is another person watching the scene. Maintaining objectivity is important.”
Hwang emphasizes three elements: the audience, the scenario and the actor.
Of the scar on his nose, he mentioned that not many have noticed it, even though he doesn’t cover it with make up. “This proves that people look into an actors’ eyes; the eyes don’t lie and it shows whether an actor is sincere or not,” said Hwang.
Along with Hwang’s emphasis on sincerity, he also mentioned two tearful scenes. “Actors cry by positioning themselves in the character and, secondly, by thinking about their own sad experiences,” said Hwang.
He prefers the former to the latter, since empathy, to an actor, is important.
In fact, Hwang was involved in one episode where there were almost too many emotions: He was in real fix when shooting “You Are My Sunshine” because his heart felt like he was actually falling in love with actress Jeon Do-yeon, his lover in the story.
“In that movie, I had to be in a tense relationship with my co-actors so I stayed away from them because Kang Shin-il and Yu Seon are both my close friends.” However, Hwang said that the tense atmosphere was relieved once the shooting was over.
In the fall, Hwang stars in a romantic film “Happiness,” directed by Heo Jin-ho and will be shooting “A Man Once a Superman,” directed by Jeong Yoon-cheol. On average, Hwang stars in three to four films a year and some say that he does too many. In response, Hwang says, “I breathe only when I act.”
estyle@joongang.co.kr