GoGreen Man wants you in his army

GoGreen Man wants you in his army 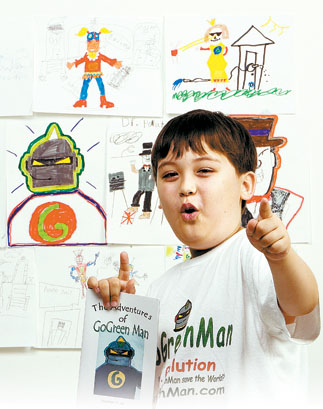 Jonathan Lee with a picture of GoGreen Man, the character who is the focus of his successful environmentally-themed Web site. [JoongAng Ilbo]

Jonathan Lee looks like any other ten-year-old from the United States.
However, unlike other boys his age, Lee recently lectured to 34 U.S. senators and congressmen, including former presidential candidate John Kerry, and received a five hour briefing on a hybrid vehicle from Toyota ― largely because of the fruits of his active imagination.
Lee, who calls himself an environmentalist, has created a cartoon character, “GoGreen Man.”
Lee said his ideas for an environmentally-friendly superhero came to him out of the blue, when he was watching a documentary about global warming.
GoGreen Man, who lives at 248 GoGreen Boulevard, fights anyone who harms the environment. His weapons are a wind energizer, solar sun shield and a hydro hipster.
Every superhero has a powerful enemy and GoGreen Man’s biggest nemesis is Dr. Pollution, whose goal is to destroy the earth.
Other villains who make GoGreen Man’s life more challenging are Petrol Pirate, Trashinator 2000, Gas Goon, Pol’Tick Al, Trashinator 2007, Waste Woman, Taxin’ Texan and Pande Opposito.
GoGreen Man also has friends to help him in times of crisis.
His allies are Hannah Heart, Recycle Roger, Water Woman, King Nature, Sandra Sunburn and Professor Fusionstein, the last being a master of alternative energy sources.
Lee posts GoGreen Man’s adventures on his Web site, www.gogreenman.com, which his father, Lee Kyeong-tae, 37, helped to build. The Web site has received roughly 150,000 visitors since it became operational last year.
Lee’s latest story idea features a massive yellow-sand tornado that descends upon GoGreen village.
The idea was based on reports he heard about the yellow dust that is generated in Mongolia, which frequently causes yellow-dust storms in Seoul.
The Web site’s popularity increased after Jonathan’s mother Melissa suggested he send letters to members of the U.S. Congress. Lee agreed because he wanted to tell as many people as possible about his stories and the need to protect the environment. Not long after that, Lee, who lives in a small town in Mississippi, was invited to Washington.
Lee said he was most excited when he met Senator Kerry. The young boy says he will never forget the moment when the senator gave him a copy of Kerry’s own book on the dangers of DDT, a potent bug spray. Lee said he told the senator that he had already read the book. This surprised Kerry, since the book is one that many adults find difficult to read. The meeting between Lee and Kerry was covered by many U.S. media outlets, including the Washington Times.
Although Lee was born in Korea, he has spent most of his life in the United States. His entire family moved there when Lee was still in diapers. His recent visit to Korea was his first. Lee was invited by the Korea Forestry Service to participate in Environment Day, which was on June 5. Lee returned to the United States on June 21.
During his trip Lee had a tight schedule. Not only did he visit Mongolia to plant trees but he also spoke out publicly about the danger of global warming in front of Seoul’s City Hall. He met Lee Chi-beom, minister of the environment, and former President Kim Dae-jung invited him to the event celebrating the seventh anniversary of the joint declaration by the two Koreas. During the event Lee suggested planting chestnut trees in North Korea. He said it was a significant moment since he was able to send a message out to Korean politicians who were at the event, including Han Myeong-sook and Sohn Hak-kyu, who are both running for the presidency.
Lee’s dream, however, is not to become an environmental writer or a scientist. He hopes to become an aide to a senator in charge of environmental issues. Lee said he didn’t want to become a senator because that job seems extremely busy.
In the meantime, Lee said he is planning to work on a bill to advance environmental education for children with the support of U.S. lawmakers.
Lee’s active participation in saving the planet extends beyond meeting politicians and posting stories on his Web site.
The adventures of GoGreen Man will soon be in bookstores, as the young boy has signed a book contract with Samsung Books in Korea and is currently negotiating with Shogakukan, a Japanese publishing house. 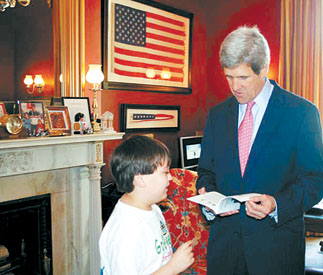 But could a single documentary really turn a young boy into an active environmental advocate? Lee says in his case it has. He said watching the show made him realize that global warming has to be stopped now and this belief gave him the necessary passion. He said he believes anyone who watched the show would be affected in the same way as he was.
Is there a secret formula that Lee’s parents used to help their son explore his imagination and make such impact?
Lee doesn’t go to school like other boys or girls.
Instead he gets his education from his mother, who teaches him English, mathematics and science for three hours each day. Lee is allowed to do whatever he wants for the rest of the day.
Lee said he spends his free time reading books, watching science programs and creating adventures for GoGreen Man.
His parents wanted Lee to get an education that was different from that provided in the average American school. “We don’t allow him to eat junk or drink carbonated drinks,” said his father. “Or watch cartoons on television.”
Lee’s father said he has never pressured his son to study, like many Korean parents do. Although Lee is given many choices, his parents said they prevent him from doing things they believe would harm a child.
Some parents would feel overwhelmed by having a famous environmentalist as their child. For example, at least one of the parents has to travel with him when he visits an organization or an event.
Therefore the parents focus less on their own jobs.
“We may be making less money than we should, but we look at the situation as giving the gift of time to our child,” said Lee’s father. “The strength to voice his thoughts without hesitation, even in front of a former presidential candidate, is something that a child cannot learn at school.”
But even though Lee is a budding global environmentalist, he says his family comes first. When he was in Korea he received an invitation to visit China. However, he was worried about his mother and little sister who had been left behind in the United States. He refused the invitation but promised to visit China soon, with all of his family.