Flattery, the sincerest form of sycophancy

Flattery, the sincerest form of sycophancy 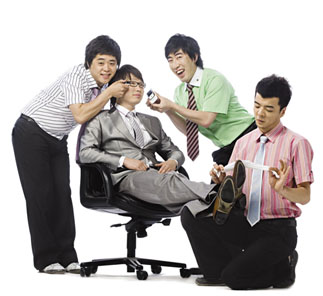 Picture on the top (From the left) Assistant: We’re going too far with flattery! Supervisor: An old proverb says, “Flattery even melts iron.” Manager: Quit the job if you can’t kiss up to him.

“The Chairman’s Guidelines,” a popular comedy show on SBS, features an assistant manager and a supervisor who compete over who is best at flattering the chairman. They make absurd comments like “If he wanted, I would play dodge ball against a bowling ball,” as they vie to see who can be the bigger sycophant.
The show is wildly popular among Korean employees. “Regular salarymen empathize with this show’s premise,” said Hyeon Byeong-su, who plays the chairman. “It is similar to how they live their lives. It hits a nerve.”
Most of us have thought about how to flatter the boss, but it can be difficult or embarrassing to do it well.
Flattery is an important lubricant of human relationships, but it also tends to be a form of deception or manipulation. It can also be open to many interpretations.
“My boss was having trouble finding the right place for a foothold during a company mountain-climbing event,” said a trading company manager. “Then, one of our employees held his hands together and made a stirrup for him. The chairman used the stirrup as a boost and advanced up the trail.”
The manager says that the helpful employee was later bombarded with criticism. His response was “Even if I helped the chairman out of sincere loyalty, others would have insisted I was being a sycophant.”

What is flattery?
According to the dictionary, flattery means lavishing someone with exaggerated praise in order to please. The word originated from the French word “flater,” which means to stroke or caress.
But the definitions of flattery vary.“If you compliment the boss or co-workers to convince them to do something good for you, that’s flattery,” said the owner of a business in Seoul.
There are positive aspects to flattery. Richard Stengel, the author of “You Are Too Kind: A Brief History of Flattery,” defined flattery as “strategic praise.”
More negatively, others equate flattery with sycophancy. They say that flatterers try to butter somebody up by paying compliments that are based on the truth. But sycophants usually lie ― this comparison implies that flattery is good, while sycophancy is bad.
Most employees agree that flattery is a an essential part of their job. The JoongAng Ilbo surveyed 1,268 members of Career, a job-seekers’ Web site. They found that 40 percent believed that flattery is indispensable to human relationships. Those who said flattery is unnecessary represented only 16 percent of the total. Fifty-three percent of respondents agreed with the statement, “Flattery has a positive effect on my evaluation” and 61 percent said, “My boss is fond of flattery.” Forty-nine percent of the participants said they used flattery at least twice a month.

Flattery and compliments aren’t very different from each other
Does flattery really work? “No one dislikes being flattered,” said Lee Jeong-seok, a manager at Manine Media. “If somebody flatters me by saying something I want to hear, it works remarkably well. When an employee encouraged me by saying, ‘You are the only one who can handle this tough project,’ I felt as though I was important. I couldn’t dislike his flattery.”
Kim Jeong-a, a marketeer, regrets that she was not a better flatterer. After her team succeeded in winning a profitable project against competing companies, the person who received all the praise from the boss was another co-worker who was a good flatterer.
But there is an old Korean motto that says “Too much is as bad as too little,” and it still holds true in some circumstances. “One of my employees kept saying ‘You look very young today,’ or ‘What an intelligent decision you have made,’ and things like that,” said an advertising company executive. “But it made me feel very uncomfortable, so now I avoid seeing him.”

Timing is everything when it comes to flattery
The secret to successful flattery is proper timing and tact. For example, saying, “Your son looks very strong, how old is he?” can have more of a flattering effect instead of simply asking, “How old is your child?”
Moreover, blunt questions can be dangerous as they may sound rude. Another tip is to mix straight talk and compliments. “I used to arrive at work later than my employees,” said Lee Min-seok. “One morning, an employee said, ‘If you had been here earlier, our rival companies would already have gone bankrupt.’ The mix of straight talk and flattery made me trust him more.”
What about flattery and gender? “I have one female co-worker who really gets on my nerves with excessive flattery,” said a manager at an advertising company. “She gets her husband to help at company events and even visits the houses of other executives to do their dishes.”
However, Hwang Jin-young, who works at a large corporation, has a different opinion. “Men have lots of chances to flatter their boss ― for example public baths, a pub or a golf club. But those are usually places that exclude women.”

Flattery in everyday life
The workplace is not the only place where flattery works. Manager Han Jae-yun, who works at the Sohn Seok Hwa Boutique in the Shinsegae Department Store, composes handwritten letters to customers and sends them out with their deliveries. Thanks to his cordial letters, the sales record of his boutique is one of the best in the designer clothing department.
Flattery is also vital in family relationships. “Both of us work, so my husband and I have little time to care for my mother-in-law,” said Choe Seon-a, who never forgets to compliment her husband’s mother whenever she meets her. “To make up for not seeing her, we make an effort to always say nice things.”
Some experts have a high opinion of flattery. “Flattery creates good relationships through praise,” said Roh Ju-seon, Chief of Korea Personality Assessment & Consulting. “Try to find out others’ good points, then you can be a successful flatterer.”
Others disagree with Roh. “The prevalence of flattery means that businesses have become very hierarchical,” said Gu Bon-hyeong, a personality consultant. “Flattery corrupts the spirit of fair play and fails to motivate company employees across the board.”
Excessive flattery should be avoided, but ignoring flattery can also be a problem. For those who work in the field of service or sales, being a good flatterer can boost your competitiveness. If you can’t escape from flattery, make good use of it.

For beginners
Flattery starts with a firm grasp of the situation ― it’s important to know what kind of flattery is going to be appropriate. A veteran hotelkeeper agrees that flattery is the art of timing and tact. “When you wait on a couple, you could praise the wife for her beauty, saying to the husband, ‘You’re lucky to have married this beautiful woman.’ Both of them would be pleased if they were really married,” he says. “But what if they are in an inappropriate relationship? Then the compliment could cause embarrassment.” Specialists also suggest that compliments on personality or ability are more effective than trying to flatter somebody’s appearance.

For advanced flatterers
Flatter someone without getting caught. Forge an impression that you’re not good at flattery. “Show some hesitation when flattering someone. Your boss won’t notice that you’re buttering them up,” says Mun Ji-seok. Asking for advice from the boss is another good way to make them feel important. Song Min-a often talks about issues with her bosses and asks them for advice. After following the suggestions, she tells her boss, “Your suggestion was terrific.” Also, be specific with your compliments. “ Just saying ‘Your show was fun,’ is not good flattery,” said comedian Kim Tae-hwan. “I would rather hear ‘I laughed when you danced like a duck.’”

For master flatterers
Mix a little criticism with your compliments. “If a person always praises somebody, we say he is a flatterer,” says a chief executive. “But we don’t like a person who is always critical either. Mix criticism with compliments; the ratio should be one criticism to nine compliments. That will make your flattery effective.”
Flattering one’s employees is a good approach. An executive officer of a distributor says that he celebrates his employees’ wedding anniversaries. “It helps increase productivity, which in the end benefits me.”
Specialists say they have proved the positive aspects of flattery, calling it the “Pygmalion effect,” or the process of making something beautiful out of the ordinary. If people receive compliments, it is natural for them to struggle to meet the implied expectations. “Unless it is excessive, flattery helps soften the rigid atmosphere in the workplace and it strengthens morale,” said Kim Beom-yeol of the LG Economic Institute.