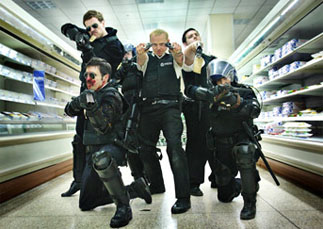 This will come as no great revelation to anyone, but what a difference gender can make when it comes to the movies.
About two-thirds of the way through buddy cop parody-black comedy-slasher flick “Hot Fuzz” ― as all semblance of seriousness had been chucked out the window in favor of a gleeful orgy of gunfire and random acts of violence ― I was having the time of my life.
But it was just at this point that my female companion ― who does have good taste ― leaned over and suggested we walk out.
Her complaints? The film was incoherent, pointless, silly, and simply couldn’t settle on what it wanted to be. All true. And yet perhaps it was testosterone (and a little more experience with the genre) that made me forgive all of these faults in favor of the same movie’s genre-bending originality, kinetic camera work and simple joy of spirit.
At the start, we join the rising career already in progress of supercop Nicholas Angel (Simon Pegg), a London patrolman with a simply unbelievable arrest record that stems from him being absolutely no fun whatsoever. Others have noticed this ― and the higher-ups, in a scene of snappy repartee that makes for a brilliant five-minute indictment of British bureaucracy, exile Angel to the sleepy town of Sandford so he’ll stop making them look bad.
Before he knows it, up-and-comer Angel is stuck as a patrolman in a dead-end job in the nation’s “model village” with nothing but his potted peace lily for comfort.
Of course, he takes his new post a bit too seriously as well, clearing the pub of teenagers and bringing in a drunk driver on his first night. That driver turns out to be Danny (Nick Frost), the son of the infuriatingly nice chief of police.
Of course the two end up as partners, and all seems on track for this to turn out to be yet another heartwarming buddy comedy with a few chuckles and a happy ending.
Here’s where things start to get weird (and, coincidentally, where “Hot Fuzz” lost my female friend). Suddenly Sandford is struck by a string of grisly, very graphic murders disguised as accidents that only Angel seems to think stink of foul play.
The townspeople turn out far weirder than your typical rural English denizens, with local supermarket owner Simon Skinner (Timothy Dalton) constantly referring to removing people’s heads and generally being creepy.
The social events, particularly the meetings of the Neighborhood Watch Organization, are funny jabs at the petty concerns of image-obsessed town dwellers ― public enemy number one is not public drunkenness or domestic violence, but the human statue in the town square.
Meanwhile, Danny and Nicholas bond over “Bad Boys 2,” and check out the murder case on their own time, only to find the answer’s a lot simpler ― and frankly ridiculous ― than they imagined.
What follows is an all-out blast-em-up in a small English country town.
It should come as no surprise that “Hot Fuzz” frothed forth from the minds of Pegg and Edgar Wright, the same team that brought the equally bizarre (and appealing) “Shaun of the Dead” into the world.
Pegg is one of only a few comedic actors who could take the stone-faced role of Angel and make him not only sympathetic but also hilarious during the film’s later unraveling. Frost also does well as the fat, contented daddy’s boy obsessed with the same police thrillers that inspired “Hot Fuzz.”
And just try to count the cameos! Even Peter Jackson puts in a turn as a crazed Santa Claus.
The film’s biggest asset ― its unpredictability ― also turns out to be its biggest flaw.
Wright and Pegg jerk their audience back and forth betweeen drama and farce several times too many, and this definitely might have been a better movie had they stuck to the latter once bullets began to fly.
But this is a minor quibble. “Hot Fuzz” is still a sardonic, well-acted visual delight packed with light-hearted parody and black comedy ― but that also manages its fair share of genuine character drama.
Well, if you’re a fan of big explosions and police movies.
If you’re not, I make no promises.