Taking Confucius with a pinch of salt

Taking Confucius with a pinch of salt 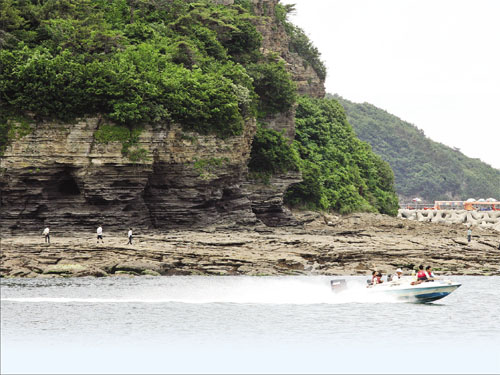 Chaeseokgang, a beach with rock cliffs, is a major attraction on the Byeonsan peninsula. All photographs by Ahn Yoon-soo

BUAN, North Jeolla ― A long time ago, Confucius wrote that an intelligent person likes water while a kind-hearted person likes mountains. Yet, in 21st century Korea, you don’t have to be either wise or gentle to enjoy water and mountains. Just hop in your car, step on the accelerator and head for the Byeonsan Peninsula on the west coast, about a three-hour ride from Seoul.
The Byeonsan peninsula is in Buan County, North Jeolla and is noted for its treasures of many kinds. From centuries-old temples and mountains to beaches with rock cliffs, this area has almost every pleasure that traveling in Korea has to offer. No wonder the whole peninsula has been a government-designated national park since 1988. It is home to the so-called eight scenic masterpieces and, for a time-efficient one-day trip, the national park administrators recommended an itinerary that visits two of the eight, Chaeseokgang Beach and Naeso Temple, finishing up with the joys of fermented fish at Gomso Port.
One essential reminder for your trip is that you must check the times of tides in advance. Korea’s west coast, unlike its east and south coasts, is noted for the wide variety of its tides. Chaeseokgang, in particular, is best appreciated during the ebb tide, when the cliffs and rocks emerge from the sea. You can call the national park administrators at (063) 582-7808 (only Korean spoken) to check the times of tides. 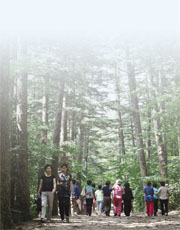 An avenue of fir trees leading to Naeso Temple.

In Chinese characters, Chaeseokgang means “the river by the colored rocks,” although this Korean version is actually a beach. The reason for the discrepancy between Chaeseokang’s name and its reality is that people named this beach after a Chinese river, which Lee Baek, a celebrated poet from the Tang dynasty, loved for its picturesque view.
The poet died while trying to catch the moon from his boat, mesmerized by the scenic beauty and apparently, a few rounds of drinks.
Last Sunday Chaeseokang did not have a drunken poet in a boat, but it did have groups of tourists busy taking photographs of the rock cliffs. Chaeseokgang is unusual for a Korean beach because it has cliffs as well as sand and pebbles.
The rock cliffs are quite a sight as they were formed by thin layers of strata, probably during the Mesozoic era. The black and brown sedimentary rocks are folded and bent, representing the overwhelming passage of time.
Park Jang-mi, an official at the national park office, describes the rock cliffs as looking like a “pile of books.”
Running shoes are a must, as the promenade along the rock cliffs is actually more like mountain climbing, with some rather slippery rocks. The cliff also comes with several sea caves, which are a photogenic spot for tourists and a spiritual place for some shamans.
Pointing at the remains of candles scattered inside the caves, Park said that shamans enter the caves to pray and use the candles for light and meditation.
A leisurely saunter around the beach cliffs takes about an hour, but it ends in an unsightly fashion at a cluster of cheap shops and street vendors selling sea weed “that brings back your youth” with Michael Jackson blaring from a stereo.
However, this tourist spot is a must for those with an empty stomach, for it has a cluster of restaurants that specialize in raw fish and clam porridge.
Park recommended baekhapjuk, or white shell clam porridge, a regional speciality which is available for 10,000 won ($10) at local restaurants.
If you want more rock-climbing, there is Jeokbyeokgang nearby, which was named after a place in China beloved by the poet Sodongpa. The cliff face is a reddish-brown color.
Alternatively, you can head to the next destination, Naeso Temple, which is a 20-minute ride by car along the 30th national highway, which follows the seashore.
Established in 633 during the Baekje Dynasty, the temple has a 600-meter fir tree avenue. Some 700 fir trees, tall enough to shield the sky with branches and leaves, make this a stroll to remember, and it has been an essential part of visits to this peninsula.
After some 10 minutes, you get to the main quarters of the temple, whose name means “visit and everything will come back to life for you.” 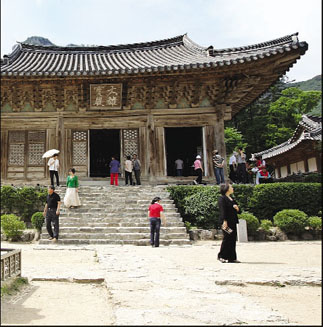 The temple has a serene atmosphere

The main sanctuary has a portrait of Buddha, and the monks say that walking with one’s eyes fixed on Buddha’s eyes will make your wish come true. As I write this, my wish has yet to come true, but I guess we all have to wait a while for Buddha to listen to all the prayers he receives.
One characteristic of the temple is that the wooden buildings are not painted with traditional colors like red, green and blue.
According to legend, a Buddhist monk had an artist come to paint the buildings, who told the monk not to look at him while he was working.
However, the painter did not come out of the temple for a month so the curious Buddhist opened the door, to find a phoenix with a brush in its beak, flying here and there. At the sight of the monk, the phoenix flew away, not completing the painting.
So instead of colors, the building boasts lattice doors with peony, lotus and chrysanthemum blossom patterns. 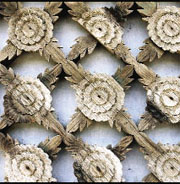 After a tour around the temple and a stroll among the fir trees, I returned to the mundane world, where I felt hungry, so I headed for Gomso Port, which is named for its variety of fermented fish offerings ― and the port comes with five hectares of salt farms, called Gomso Yeomjeon.
Lee Mong-ryong, 70, who was working at the salt farm on that Sunday afternoon, has great pride in his salt. “The salt from our bay is the best, and we have a line of customers from Japan as well, who appreciate its clean taste,” Lee said.
After 40 years of working on the salt farm, Lee has been mostly under the sun, as it takes 15 days to make sun-dried sea salt. What he detests most is rain, which ruins his work.
The port area has several restaurants serving a variety of fermented fish and seafood such as short-necked clams, shrimp, squid and pollack spawn, just to name a few.
Right across from Lee’s salt farm, there is Gomso Swimteo (063) 584-8007 and, in the center of the fermented goods market, there is Gomsogung (063) 584-1588.
The fermented food may not sound terribly appetizing, but I found myself buying bundles of fermented Pollack spawn and squid and eating them with the sauce.
On the way back home, I traveled with packages of fermented seafood on an expressway congested with traffic.
However, it had been good to learn that Confucius was wrong, at least in part ― one can enjoy the beauty of water and mountains while being both kind and intelligent. 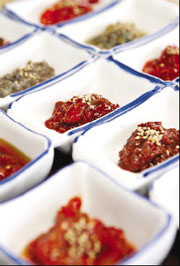 If you drive, take Seohaean (West Coast) Expressway from Seoul to the Buan Interchange or Julpo Interchange. Chaeseokgang Beach is then a 20 minute ride away. From the beach, take the 30th national highway along the sea for about 20 minutes to Naeso Temple. From the temple, Gomso Port is only a five minute drive. If you want to go on a tour package, Mode Tour (1544-5252) offers one-day and two-day programs. If you can go for longer than one day, you can add climbing Mount Naebyeon to your schedule and check out Jikso Waterfall and Wolmyeong Temple. It usually takes three hours from southern Seoul to the Byeonsan Peninsula, but on weekends, get ready for traffic congestion along the west coast.