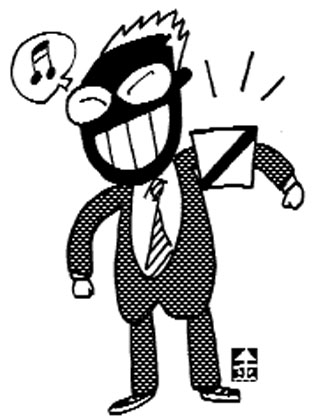 Even though it’s hard to spot a beeper these days, there was a time when they were a symbol of wealth. People would install several car phone antennas that were taller than the average adult and vehicles sporting those antennas were passed through any checkpoint. It’s been only a couple of years since people viewed a governmental parking pass as a symbol of social status.
An armband symbolizes this type of authority. It provides a cover of fake authority. It was the power of an armband that allowed Im Jong-sul, a villain in Yoon Heung-gil’s novel “Armband,” to be treated decently for the first time in his life.
A man of genuine authority doesn’t need an armband. It is a way for the weak to survive by disguising themselves with their masters’ power. Unfortunately, when they are addicted to armbands, they forget who they really are and go out of their minds.
They get a sense of identity from an armband, similar to the story of Jim Carrey’s movie “The Mask.” The weaker they are in reality, the more powerful they become as soon as they put on the armband. They make frantic attempts to wear it.
In Korea, an armband for a funeral has been a symbol of regret and mourning. However, the circumstances changed from the day Japan colonized the Korean Peninsula. Japanese colonizers forced the people of Joseon to wear armbands in order to mobilize them for war, not only the military police but also ordinary citizens, such as the heads of villages. They made a band a symbol of ruling power. The worst kind of armband was used during the Korean War. The North Korean army fastened armbands on the weak with the intention of overthrowing those in power. They advised them to pay back their deep grievances with vengeance. It was the armband of the young Red Guards that drove China into madness during the Cultural Revolution.
President Roh Moo-hyun berated leaders in this country as “those wearing armbands.” It reminds us of the scene in the novel “Armband,” when Im Jong-sul blamed the school principal for appointing only smart guys to the student council.
As if to support his words, Roh demanded that universities accept 11 percent more students from low-income families, which means putting armbands on those students without questioning their abilities. He even deplored the fact that there has not been enough change in the ruling group since the 1987 democratic regime was launched. Does he want to use those students as his Red Guards to turn this country upside down?