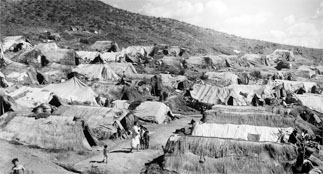 A refugee camp on a hillside near Seoul.

A strong work of fiction like “A Toy City” reminds us to count our blessings, that our problems are mainly luxury problems.
Sitting in a Seoul coffeeshop with gourmet cheesecake in my mouth, it is hard to imagine the 1950s post war Seoul described in understated and compelling words by author Lee Dong-ha ― the stench of public outhouses with long lines of impoverished refugees clutching toilet paper, hungry children running in packs, nightly screaming from somewhere in a ghetto.
Told through the eyes of a fourth-grade boy attending a refugee school on a bare hillside, the 102-page novella should be read by Seoul youngsters lost in the PC bangs of today, wired on sugar, caffeine and online war games.
Real war is hell, and “hard-scrabble” cannot begin to describe the conditions in Seoul after the Korean War ― Grim. Bombed-out. Hunger. Broken dreams.
Through “A Toy City,” we feel some of the alienation of those “dark and confusing” days.
One of the boy’s neighbors is Mr. Ju, a skilled carpenter who flies into drunken rages, terrorizing his family, ripping apart his humble wood shack of a home, then rebuilding it over and over.
Writes Lee, “He was always giddy with some violent attitude much more forceful than any alcohol intoxication. Namely, the resentful rancor he felt about his past life, bitter to the marrow, compounded by the total emptiness of the life remaining to him. Maybe that wooden crate of a room was the only universe, the only toy left for Mr. Ju after losing everything important in his life.”
The boy’s family moves to Seoul from the countryside, impelled by some vague hope of a better education for their son.
“As for my mother, she was leaving behind more relatives than any person who had left the village. Even so, not many people came out to see us off when we left. That was why my mother was furtively wiping tears from her eyes with the corner of her long cotton apron. Crouched beside me between the furniture, she couldn’t have looked smaller or more pitiful.”
Arriving in the city, the boy immediately gets sick from bad water. He sketches the scene: “Wooden barracks like sardine cans; low roofs made of tin cans; alleys, so many and so narrow, dark and muddy; streets littered with burnt charcoal and cork ashes; neighbors talking loudly in a chaos of many different dialects with voices of every description; children with their faces, hands and feet all burned pitch black by the sun.”
The boy’s father is honest but incompetent, a farmer who knows nothing but the soil, trying to survive in an urban ghetto by selling muffins.
“Hands that were used to working in the soil were clumsy and uncoordinated,” Lee writes.
The father thinks he can turn a muffin pan into a profitable business. It’s a pipe dream. The muffins have a bitter after taste, and the family eats them for every meal to the point of sickness.
The boy narrates the family’s “grand supper” on page 48: “Finally, father came in. The food for the evening meal was in his hands. Mother took it from him and put it on the table. It was the muffins.”
Sleep is difficult in the ghetto. Sounds storm through paper-thin walls. Neighbors fight. Children wail. 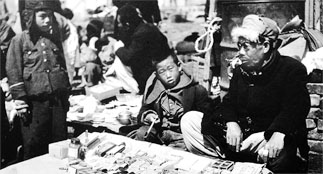 A father and his son sell medical items in the street. People struggled after the Korean War. [JoongAng Ilbo]

One night the boy hears one of his neighbors: “‘I’m going to kill myself, mother! I’m really going to kill myself.’
While the daughter kept weeping, her mother’s anger deepened.
‘I could care less whether you live or drop dead. You’re the one playing around with this guy, so why complain to me. This is my house, remember? I’m sick and tired of you two, so just get the hell out of my sight. Why should I suffer from living with you, bitch and bastard. Whether you go at it day and night, or just go rot in a ditch, it’s none of my concern. Just get our of here right now, you stupid creatures.’”
The luxury of air conditioning was not a reality then.
“Summer nights were unbearable. The heat in the box room was sickening. The stench from the water stagnating in the drainage ditch was sickening. The merciless assault by mosquitoes after sundown was sickening. Indeed, on summer nights, life itself was little more than a sickness.”
During the July monsoons, the roof can’t stop the rain.
“The rains, which have soaked everything under the sun, finally succeeded in saturating our souls ― the vertigo and crystalline consciousness brought by hunger even allowed us to enjoy the sound of the rains as they drowned the earth.
“At such a time father would hum a song. Maybe it was not so much a song, but more just murmuring to relieve his depression. He was humming the chant of peasants planting rice. There, in that toy city of ours...”
In the end the boy is taken in by a richer family, given a job and promises of a wife and future. He tastes Chinese noodles for the first time. Eventually, however, he returns to his family.
“I felt I just had to go back to that filthy, smelly box of a room that was ours. I looked around at our poor, but indescribably cozy room.”
“A Toy City” is the first in a trilogy that includes “The Hungry Soul” and “The Hour of Judas.”
Translated by Chun Kyung-Ja in 2003, the book is part of the Portable Library of Korean Literature, designed to bring Korean creative writing into the mainstream of world literature.
Lee was born in 1942 in Osaka, Japan and immigrated to North Gyeongsang province right after Korea’s liberation from Japanese rule. He has won several literary awards,
Back in my home state of Oregon I have a close Korean friend who does not appreciate how Korea is portrayed on the TV show “M.A.S.H.”
She wants to talk about skyscrapers and success. But sometimes we must look at past pain and remember sacrifice in order to appreciate the present.
Lee’s book helps us do that.