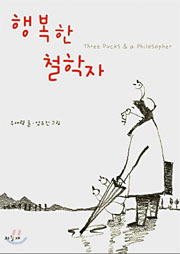 “Happy Philosopher” (Haneulje Publishing) by Eom Yu-jin is a book that made me laugh so loud that it almost became embarrassing.
The main character in the story is the first son in six generations and he is part of a family of eight children.
He lost his father at an early age and grew up with a strict mother. He succeeds in winning the heart of a woman after writing a lengthy love letter saying, “We are different entities, but we are not others.” Perhaps his major in philosophy determined his style of writing.
His wife is also a striking character. “It’s an eternal mystery to decipher exactly who saved who through this marriage,” she observes, “but I have one confident theory. If a philosopher managed to find a wife, it was probably he who was saved.”
His eldest son, who was born while the couple were studying abroad, has inherited his parents’ literary spirit. When he is asked in kindergarten to tell his fellow students what his father does he responds with an adamant “nothing.”
When he is asked the same question again, he says, “Sleeping.” When their youngest son, who tagged along to a discussion group of philosophers, is asked about his future dreams, he tells them that he wants to become a philosopher. Then he adds, “I have no particular gift in any other field. I have a plain character, and I think being a philosopher would fit me the best.”
Perhaps the title of the book should have been “An Idiosyncratic Philosopher’s Family,” as the book searches for the profound lessons of life in strange places. For example, the author writes, “When a life that depends on me is so weak and helpless, then love pushes to the extreme.”
This book is the story of a middle-aged man told with much love and humor. By Kim Seong-hee