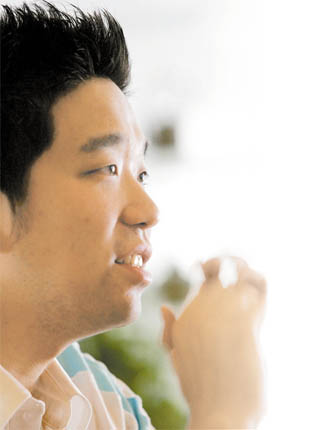 In June, singer-songwriter Lee Jeok, 33, appeared on stage with Korean diva In Soon-e.
Together they sang “The Dream of a Goose.” The song, originally written by Lee and Kim Dong-ryul during their Carnival group era, was later remade by In.
“Compared to our original song, the new version moves people’s hearts even more because the lyrics actually overlap with In’s life,” says Lee. The duet reminded Lee of when he made his debut in 1995.
Since then, he has been a member of a variety of groups, including Panic, Carnival and Gigs, where he encountered different genres of music,
from pop and rock to blues.
Recently, Lee released his third solo studio album titled, “Song Made of Tree.” Lee also is preparing for a concert series beginning Wednesday.
Twelve shows will be presented at the SH Theatre, located in Daehangno, central Seoul.
Most seats are sold out, so Lee is planning to hold encore performances in August.
In Daehangno, Lee will sing songs from his recent third album, which are mainly composed of acoustic music. Lee mentioned that the past 12 years of his career have been a period of experimentation in which he sought different styles
of music. More recently, however, he said he will pursue a more indepth
and consistent path.
“When listening to the songs on the third album, people will understand what kind of music I pursue,” Lee said. Lee’s single “Relief”
expresses his gratitude toward his girlfriend.
On the track a piano and acoustic guitar are used to create the overall beat, rather than electronic instruments.
“This in return brings a lyrical sound,” Lee said. Lee studied sociology at Seoul National University, and some of the lessons he learned in college are reflected in his musical growth.
For example, he said that he was more of an individual who would always stand behind the scenes and observe.
“Likewise, in terms of music, I tend to be on the boundary ? my music is neither pop nor independent. ” Lee is looking forward to this fall.
He is planning another performance in addition to the shows scheduled for Daehangno.
Lee also mentioned that an album commemorating the 10 year anniversary of the group Carnival will be released next year.