Markets for everything from pig skin to jujube

Markets for everything from pig skin to jujube

A man and his wife cross a bridge with their produce as they journey to Jucheon Market, Yeongwol County, Gangwon.

27th in the series | Traditional Markets 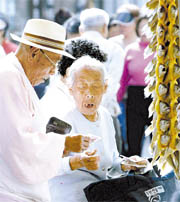 Scenes from traditional outdoor markets across Korea where merchants sell many varities of grains, vegetables and food. [JoongAng Ilbo]

Moran Market, named after the Korean word for peony, is hardly
as tranquil as its name suggests. This market bustles. Shoppers
bargain in loud voices and merchants beat out strange
rhythms with their hands to attract buyers for exotic creatures like crawling
turtles and dried centipedes, which are claimed to have medicinal
properties.
There are diners slurping noodles, merchants passing out cups of exotic
root drinks and peddlers haggling over caged rabbits, cats, goats, chickens
and ducks. Even the ever-notorious dog meat can be found, at around
150,000 won for one kilo.
In the midst of the pandemonium, some shoppers pause to enjoy foodstuffs
from the past that are hard to find elsewhere, like patguksu, noodle
soup made with red bean paste, and delicacies like fried pig skin and various
types of offal, served hot from sizzling grills.
A visit to Moran Market is like a trip to Korea’s past. Visitors seem
pleasantly energized by its rowdy ambience.
Korean poet Kim Hyeong-su describes the mentality of shoppers at
these traditional bazaars in his poem “Countryside Market.” He writes that
villagers flock to the market to cure their loneliness. The poem was recorded
as a song by the vocalist Jang Sa-ik. 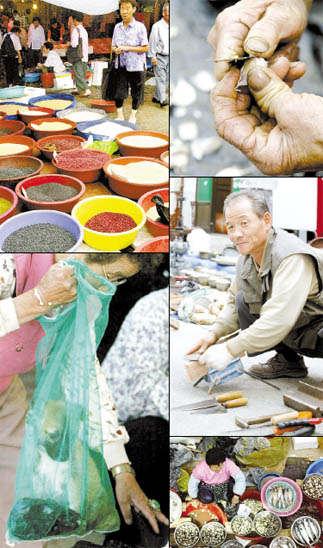 Koreans use the expression shijang badak or “market floor” to refer to
the dizzying crowds and their noisy surroundings. While strolling
through Moran Market, one begins to understand what that means.
Over 2,000 vendors visit the market in high season, attracting over
50,000 clients. The market opens on dates that end in 4 and 9. Immediately
before holidays, when prices of produce and meat soar, even in discount
stores, traditional markets become a popular place to find a bargain.
“There is a traditional market only 10 minutes from my house,” said
a young male shopper. “It’s a far better alternative because you can browse
through different stalls and bargain before you actually buy anything. It’s
also fun to be somewhere with so many people. It means there is something
special to see.”
The history of Moran Market is typical of a traditional Korean bazaar.
Stories vary about its origin, but experts note that a five-day market has
existed in the area since the Joseon Dynasty.
When the Korean War broke out, refugees fleeing Pyongyang created
a town for themselves near the market, naming it Moran Bang or Peony
Peak. During the 1960s, Koreans moved from the countryside to cities,
building houses without permits around the market.
As an alternative, the local government built a town for the illegal residents.
Even so, the market was a headache for government officials because
it caused major traffic congestion near the city bus terminal. It was on the
verge of being closed until 1990, when the market relocated behind the
terminal, with an ambitious plan to spread Korea’s cultural heritage to foreign
tourists.
Aside from Moran Market, the largest traditional market around
Seoul, most cities and townships in rural Korea still have one or two small
outdoor markets. Some sell sundry items like food, socks and carpenters’
tools. Other markets are more specialized, like the medicine market at
Yakryeong, near Daegu; the ox market in Hyeongryong and a ceramics
market in Gwangju.
In “Markets of Korea” by Joo Young-ha, an associate professor in the
department of folklore at the Graduate School of the Academy of Korean
Studies, writes that open-air markets in Korea were more than they
appeared, evolving into sites for networking, information-sharing and
entertainment. 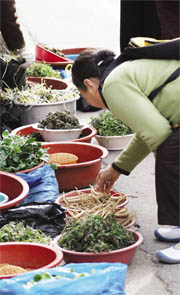 In the original farming society of Korea, merchants used to travel
around different markets across the country. Wagon trains of vendors
moving from market to market were a common sight.
Before the notion of a work week was established, market days were
equivalent to holidays because the market was often the site for village
entertainment like wrestling competitions. It was also a place for getting
acquainted with new neighbors and arranging marriages for one’s children.
Traditionally in Korea, outdoor countryside markets opened every five
to seven days, mainly because of the small population mand limited supply
of goods. Their main purpose was for merchants to sell their small
stocks of necessities, such as seafood, homegrown vegetables and crafts,
to villagers, compensating for a dearth of other sources of retail distribution.
Markets were also the first place to get a sense of any major social
changes that might have been taking place in Korea.
The markets also tended to be places where imports made their first
appearance. During the colonial occupation, imported items from Japan,
many of which had never before been seen in Korea, appeared on market
stalls.
The same phenomenon occurs today with unusual foreign foodstuffs
often appearing on stalls in traditional markets before they show up elsewhere.
Markets in Korea were also a site for political activism.
When the Independence Movement swept the country in 1919,
activists deliberately chose to demonstrate on dates when markets were
open, in order to attract the biggest crowds. Things haven’t changed much.
Now, before every election, one of the most common scenes on TV is a
candidate showing off his friendships with merchants, shaking hands and
sampling food while his campaign truck slowly rolls by playing his election
songs.
Today, the new tradition of city markets has taken over. Now urban
markets resemble department stores. Typical urban markets such as Namdaemun
and Dongdaemun, both of which have devloped from traditionaol
roots, even own their own factories and offer a mix of products
both imports and exports ? at wholesale prices.
Like any department store, they serve as major shopping attractions
for tourists and stay open every day past midnight.
myfeast@joongang.co.kr

Korean markets and their wares