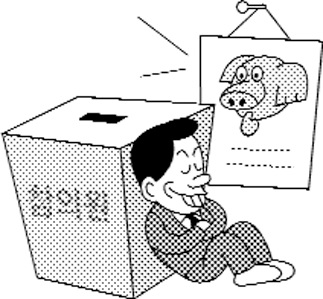 Every three years in Japan, elections for the House of Councilors are held. The term is six years, but an election is held every three years since all the 242 seats are not chosen at once but in two separate elections for 121 seats at a time. Local elections are held every four years. Therefore, every 12 years, the least common multiple of three and four, the election for the House of Councilors and local elections are held in the same year. Therefore, the two elections are held together every Year of the Pig.
A veteran reporter of the Asahi Shimbun, Ishikawa Masumi, studied election trends for 60 years from 1947 to 1995 for five Year of the Pig elections. He found out that for every Year of the Pig election, the election for the House of Councilors had low turnouts and the conservative party, the Liberal Democratic Party since 1955, struggled in elections.
Ishikawa did not see this as a coincidence but connected it with the Liberal Democratic Party’s campaign strategy. The Democratic Party heavily relies on the councils in local areas. They form human networks and organize gatherings, encouraging people to vote for the Democratic Party. However, Ishikawa explained that in the Year of the Pig, the local councils put all their efforts into the April local election, to maintain their place, and they become passive in the July election.
Many think that their election is over, so they lose their edge and become indifferent in the July election. Therefore the turnout goes down, and the Democratic Party fights a tough game. However, for the New Komeito, which receives support from Buddhist organizations, or the Communist Party, which shows a firm organizational unity, the turnout rises. Ishikawa named this the “Pig Year Phenomena” in his book.
The election for the House of Councilors will be held on the 29th of this month. For Shinzo Abe, who will be going through his first House of Councilors election in a Year of the Pig, it might be a jinx.
But the situation is a bit more serious. With a report that records for over 50 million yen in national pension payments have disappeared, Abe’s approval rating is lower than ever. Junichiro Koizumi, whose popularity was sky-high, even lost one seat to the non-governing party in the July election in 2004. Unfortunately, the reason for the loss was the disclosure of unpaid pension bills and the public’s dislike of the intellectual approach to solving that problem.
If this is a trend, the pension jinx might be added to the Year of the Pig jinx.
In light of all of this, the interest in this year’s election is hotter than ever.

The writer is the Tokyo correspondent
of the JoongAng Ilbo.