[Talk of the town]Los Angeles cancellation is No. 5 on pop singer Rain’s United States tour

[Talk of the town]Los Angeles cancellation is No. 5 on pop singer Rain’s United States tour 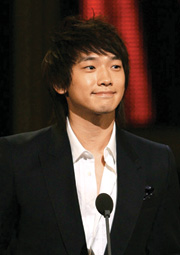 At a fan event in Los Angeles last week, Rain said that he was “sorry” and “upset” about a last minute cancellation for a performance in the city’s downtown Staples Center.
“I tried my best, but there were problems with setting up the stage even on the day of the show,” Rain said.
“I will definitely be on the stage again as soon as possible,” he said.
The performance was cancelled after equipment brought from South Korea for the performance was deemed unsafe according to Los Angeles fire codes.
Thousands of fans, including ones who flew in from Japan and Taiwan, had to wait outside the stadium for several hours without any explanation. The postponement is the fifth on Rain’s U.S tour. Rain, whose real name is Jung Ji-hoon, was initially expected to hold his concert in Los Angeles on June 30.
By Yang Yeon-hee