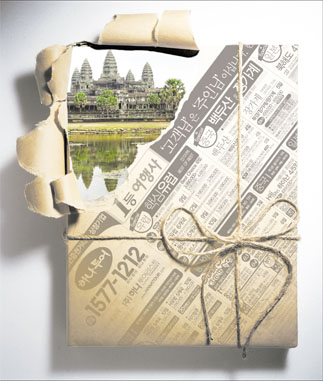 Last week a misjudgment by a pilot flying from Siem Reap, near Angkor Wat, to Sihanoukville ended in tragedy. He crashed into a Cambodian hillside and all 22 passengers onboard were killed.
Thirteen Koreans on a discount tour package were among those who died. They were aboard a 30-year-old Russian AN-24, a model that has a history of safety problems, with 109 planes involved in incidents since 1960. In 2006, a military version of the plane crashed, causing a loss of 42 lives.
The accident was a heavy blow for the travel industry, as the summer vacation season is just beginning and Southeast Asian destinations like Cambodia have become popular. According to statistics from the Ministry of Culture and Tourism, 3.3 million Koreans traveled to Southeast Asia in 2000, and that figure rose to 7.3 million in 2005.
The Cambodian accident prompted many to ask whether Korean travel agencies are cutting corners on safety in order to offer cheap packages.
The 13 Koreans who died were visiting Cambodia as part of an inexpensive package sold by Hana Tour, Korea’s leading travel agency. It was priced between 200,000 won and 300,000 won ($216 to $325) during the off-season. During the busy season ― July and August ― the price is around 550,000 won.
Experts say with any discounted product, caveat emptor, or let the buyer beware, is key. Or, in other words, you get what you pay for. If the travel package is cheap, don’t expect five-star hotels or new aircraft.
Hana Tour has been at the top of the Korean travel industry for the last nine years, largely on the basis of discount packages. Its market share is 13.7 percent, which is twice that of the runner-up. It continued to sell cheap package tours to Southeast Asia after the Cambodian tragedy. The company says it is confident about the safety of all its packages. Other major travel agencies remain active in the area. Hana Tour was selling a five-day trip to Bangkok and Pattaya for less than 300,000 won. Mode Tour was offering the same trip for 300,000 won. Hana Tour was also selling a 499,000 won five-day package tour to Angkor Wat, although this product was different from the one purchased by the accident victims.
Hana Tour said its own employees had previously taken the ill-fated Cambodian tour before it was put on sale to the public. The company says they frequently test their products this way and consider sending employees on a tour is sufficient backing for saying that it’s safe.
Kim Sung-hyuk at Sejong University said low-priced products have been a problem in Korea’s tourism industry for some time.
“People should be aware that cheap products have high safety risks,” Kim said. “It is not only the Korean government’s responsibility to warn travelers of the risk involved with cheap travel products. It’s also the responsibility of travel agencies and airlines.”
The professor said the nation should assess how much responsibility Hana Tour should bear for the Cambodian accident.
“Up until now Korean travel agencies put all the responsibility for the Korean tourists they send overseas on the local companies they are in business with,” Kim said. “People traveling with major travel agencies choose the product offered by these companies because they trust the companies will secure their safety and offer high-quality travel. Therefore, even in the Cambodia case, Hana Tour should have made sure that their clients were safe from the moment they left Korea until the moment they returned.”
Cheap travel products seem to defy the laws of economics but industry experts say they are possible because of a system called hard block. This is when travel agencies purchase large numbers of tickets from airlines at discounted prices. The system began soon after the Korean government permitted overseas travel in the late 1980s.
According to research by Hanhwa Securities, Hana Tour has, in the past, purchased 30 percent of their air tickets through hard block. Mode Tour gets 15 percent of its tickets in this way and Lotte Tours 25 percent.

When purchasing flight tickets through hard block, travel agents are required to buy seats for off-peak times. The agencies sell these tickets at discounted prices. Profits are made by attracting customers with discounted package tours and then getting them to open their wallets once their vacations begin.
Kang Min-joo, a 32-year-old artist, traveled to China with her sister in February, using a small travel agency. “We took the 200,000 won package tour,” Kang said. “It was the worst trip I have ever taken.” Kang said the guide was outspokenly rude about the young age of the clients on the tour. “My sister and I were the only ones above 30 and the guide kept complaining that young people won’t buy anything during the trip.” To cover the financial loss from discounted packages the tourists are taken to various department stores and commercial outlets for shopping. The more people purchase from these stores, the more commission falls into the hands of travel agencies and tour guides.
“Major travel agencies such as Hana Tour were born from the hard block system,” said Kim Yong-ho, an analyst at Hanhwa Securities.
However, since early this year, Korean airlines have abandoned hard block because the number of Koreans traveling abroad has risen sharply and airlines no longer worry about empty seats, even during off-seasons.
Despite the cancellation of the hard block system, Hana has managed to enjoy a 38.8 percent jump in its second-quarter revenue compared to the same period last year. Net profit between April and June was 4.9 billion won, a 75 percent surge from the second quarter of 2006. One of the reasons for the increase is because travel agencies have begun targeting foreign airlines for their hard block sales.
“Travel agencies have no choice but to use the hard block system, otherwise they lose the opportunity to secure seats, and go out of business,” said an official at the Korea Tourism Corporation.
Hana Tour said it has no data on expatriates in Korea traveling to other Asian countries, “The number of foreigners using Hana Tour is so small we don’t collect statistics,” said Hana Tour’s Jeong Ki-yoon, who said he didn’t think the accident in Cambodia would affect the company’s business. The tourism corporation released a statement last Friday saying that it will work on improving the safety of overseas travel. In July and August, when the number of people traveling abroad jumps, it will advise travel agencies to give clients full details about their packages, including information about the aircraft they will travel on, as well as the insurance coverage they will receive. In addition, to make sure the sale of low-price products is based on adequate information it will advise travel agencies to voluntarily publish the true cost of their packages.
Hana Tour has not acknowledged that it bears any responsibility for the Cambodian tragedy. However, it did pay for the flight to carry the bodies of the dead passengers and their family members back to Korea.