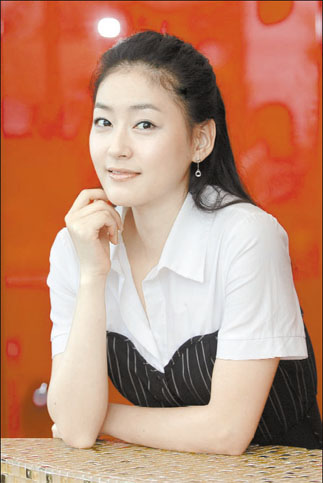 Park Jin-hee, co-star of the hit television show “War of Money,” which airs on SBS Wednesday and Thursday nights, said she is tired but not stressed out.
“Why should I feel stressed when the show is doing so well?” she asked.
The show revolves around a man who has huge debts and ends up enslaved to money. It has been enjoying an audience rating of 35 percent. The last show airs tonight. Park plays the role of a bank employee who later becomes the main character’s love interest.
Park said recently she has been learning how to arrange flowers once a week on her day off. “The job of an actor is to bring out emotions,” Park said. “And for that reason I felt like I was drying out emotionally.”
Park said she started to attend the flower arranging class three weeks ago and it has helped rebuild her emotions. Even if she wasn’t stressed out she could have become jealous, as she had to compete with acclaimed actor Park Sin-yang. In the beginning, Park Sin-yang’s outstanding performance was praised by many critics and even with the show about to end his acting is considered the main factor for its high ratings.
Park Jin-hee is unconcerned. “The show is doing well because of Park Sin-yang’s performances,” she said. “The important thing is that the show is doing well. I am happy to play a supporting role in a hit, that’s better than being the star of a flop.”
Ms. Park said the frequency of her character’s appearance is not her main concern.
“More important is the role my character has,” Park said. “While every character in the show seems to be possessed and manipulated by money, my character is the only one with a conscience, so people like her.”
Park isn’t as flamboyant as many celebrities. She is more like the girl next door. She first appeared in a KBS show called “Start.” The actress won much wider fame when she appeared in a horror flick, but major stardom eluded her.
Her name came into the public spotlight because of the amazing acting skills she displayed in a television show last year.
The show was about two women, one in her 20s and the other in her 40s, who accidentally switch souls.
“I believe I’m growing bit by bit,” she said. “I thought I was doing my best in every show I was in, but now I see things I wasn’t able to when I was a 20-year-old actress.”
Although she is a public figure, Park says she never has any desire to be a flashy celebrity. Rather, she considers herself down-to-earth. She hardly has any celebrity friends, she never buys expensive name-brand clothes or accessories and she lives off an allowance, with every other penny she earns going to her parents.
“I have never been at the top, not really,” Park said. “And maybe that’s why I have never been sensitive to trends or addicted to popularity.”
She says although celebrities should be aware of their public image, she doesn’t care about being famous.
“During breaks in filming I could go to a nearby shopping mall without having to hide myself behind hats and sunglasses,” she said.
Park is considering retirement in five years.
“I want to retire but I feel afraid when I think of a life without acting,” Park said. To subdue her fear Park said she is attending Yonsei University’s graduate school of social welfare. “I want to work in a nursery for orphans after I retire,” she added.
The actress said she has recently heard a lot of advice about what roles she should choose next, now that her talent has finally won wider recognition.
“The good thing about being recognized is that you have a wider selection of scenarios to choose from,” she said.
Park has recently worked on several feature films and says she has never been busier.
She has just finished a movie that examines the divisions between North and South Korea. It will be released next month. Additionally, she has a role in a mystery film that takes place in a Korean palace. This is expected to be on screens in October.
“Sure I have had more failures than success,” Park said. “But every time I hear such criticisms I want to say, ‘Is that the last time I will act?’ I have a lot more to show people and my view on life is that one should be true to the present.”
Park confessed that she would like to play intense and devastating roles. She also wants to play a nasty villain, one whom the audience will struggle to understand.