[Review]Charming romance with a few cliches

[Review]Charming romance with a few cliches 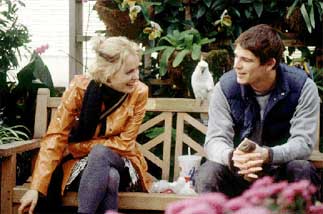 A scene from “Mozart and the Whale”

We’ve been told we are in the midst of an autism epidemic. The cause is still unclear (though it seems too much television may have something to do with it), but more and more children are growing up “on the spectrum,” experiencing difficulty acquiring language, learning and most of all, understanding their feelings and the feelings of others. On the more high-functioning side of autism lie Asperger’s Syndrome patients, who, though they speak normally for the most part and are sometimes brilliant in one or two areas, still cannot pick up emotional cues and often obsess on something after others have lost interest.
I can spout the textbook definition, but it’s difficult ― some might say impossible ― for those of us untouched by mental illness to understand the problems faced by people like the characters in “Mozart and the Whale.”
And in a way that’s precisely what makes the movie such a disappointment. Instead of confronting the agonies of autism, the filmmakers seem content to use the illness as a gimmick in a standard romance story. Or, to be a little more generous, perhaps the drama is simply an excuse to tick off the symptoms of this increasingly frequent disorder.
Donald Morton (Josh Hartnett), a so-called “high-functioning” Asperger’s patient and mathematical genius, has formed a support group for autistic patients, all of whom are worse off than himself. Isabelle Sorenson (Radha Mitchell), a hairstylist and artist with Asperger’s, joins the group, and the two hit it off.
Screenwriter Ron Bass is in familiar territory ― he also penned “Rain Man,” another film about a man with a mental illness trying to fit into society, as well as countless other feel-good dramas. Perhaps that’s why “Mozart and the Whale” feels somewhat formulaic.
It certainly provides a succinct look at the symptoms of Asperger’s among adults. Hartnett’s face is constantly knitted in nervous confusion as he tries in vain to understand the emotions swirling around him ― and he always assumes the worst. (My only interactions with severe Asperger’s patients has been on the Internet, where this paranoia that others dislike or are mocking you only gets worse, as verbal and behavioral cues ― already difficult to interpret ― disappear altogether.) Both Donald and Isabelle keep pets, some of whom are more real to them than other human beings.
Before he moves in with Isabelle, Don’s apartment is a pit of dust, old newspapers and bird droppings. And, of course, Donald is constantly distracted by numbers.
Together Hartnett and Mitchell are adorable, the former timid and calculating, the latter more of a free spirit, laughing loudly in restaurants and determined to be accepted for who she is rather than force herself to be “normal.” It’s a relationship reminiscent of “Eternal Sunshine of the Spotless Mind,” except “Mozart” is more straightforward, with Don and Izzy facing and overcoming their problems one by one to settle on an implausibly happy ending.
Another detriment is the film’s narrow focus on its two main characters, never striving to develop any of the supporting cast beyond their simple narrative functions.
Perhaps most egregiously, the group of autistic people Donald has formed ― and which Isabelle later calls their “family” ― never becomes anything beyond their respective dysfunctions. One of them can’t stop laughing at terribly inappropriate times, one makes sarcastic remarks, one steals things and plays the piano, one can’t stop talking about the weather. Next to these people, Isabelle and Donald are just mildly odd. Isabelle in particular seems a scarred but mostly normal adult.
In the end, I couldn’t help thinking that a profile of the attempt of one of these more troubled people to connect with another human being might have been far more compelling than the average romance story “Mozart and the Whale” depicts.
Of course, people with Asperger’s similar to these two characters may be inspired by their victory. But a focus on a character forced to attack even tougher challenges could have done more to spread understanding of those faced with autism. We who take for granted such simple pleasures as the reassurance of a smile or the comfort of a sympathetic ear have much to learn from them.