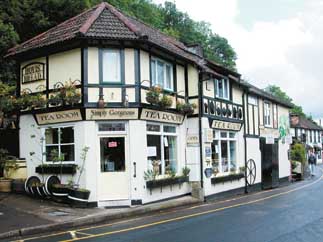 The Simply Gorgeous Tea Room in Cheddar. By Ko Juran

In May I was hunting through Namdaemun Market in search of English porcelain. The first place I visited had Royal Doulton, but the owner seemed to have used the bottom of his dinner plates to make a note of Korea’s GDP. Surely all those numbers couldn’t be a price? The owner, keeping a straight face, said the pieces were genuine and worth a month’s salary. Then a better idea came to mind. Why not fly to England, celebrate my mother’s 80th birthday, and buy porcelain at its source?
A few weeks later I was sitting comfortably onboard an Asiana flight to London. The first obstacle to a satisfactory search for Royal Staffordshire egg cups was the length of the journey. It takes almost 12 hours to get to London from Incheon. Happily, the time passes quickly. Asiana have installed personal video screens in all classes on the London route. I was able to enjoy three movies in English, including the lovely “Miss Potter,” the story of Beatrix Potter, the eccentric British author who created Peter Rabbit and Jemima Puddle-Duck. The film was good preparation for my mission, as many beautiful cups and saucers were on display in almost every scene.
As I ate a delicious ssambap and drank some lovely red wine, for both of which the airline has won prizes, I considered whether I should head directly to Staffordshire, home of the British ceramics industry, and buy at factory prices. I rejected this idea. The British have been buying porcelain for five centuries. A lot of it ends up in dusty cupboards and, after a suitable period, it is taken to an auction house. That’s where I would make my score. Operation Cheap China had begun.
My fiancee and I arrived in London in the late evening. The flight had been relaxing. The Asiana attendants had let me sit at the front of the plane for two hours, so I could plug my computer into the electrical outlets. The airline’s Travel class seats do not have this facility, but when I explained that my laptop had no battery power, the attendant immediately ushered me into the hushed confines of the airline’s opulent business class section. She even brought me some tea.
London was not my destination. I was heading for the West Country, where there is a triangle formed by the ancient cities of Bath, Wells and Bristol. All three have beautiful Georgian architecture, usually displayed in breathtaking crescents, and fascinating remnants of the Roman Empire. Staying anywhere within this triangle will guarantee a large dose of beautiful countryside, charming pubs and gracious churches.

Top: English cows get personal attention at Green Farm, Chelwood. Above: An English breakfast underway outside a Bristol auction house. Below: Porcelain items at a viewing in the auction rooms of Dreweatt Neate, Bristol.

Accommodation was at Green Farm in Chelwood, where my mother has been the proprietor for 20 years, raising cows and horses. She doesn’t take paying guests, but within half a mile there is Hunstrete House (www.hunstretehouse.co.uk), an 18th century five-star hotel set in 71 acres and the Carpenter’s Arms (www.the-carpenters-arms.co.uk), a traditional English pub with views of soft, rolling hills. And then there’s Bay Rose House (www.bayrose.co.uk), a bed and breakfast in the heart of Cheddar, the birthplace of the famous cheese, where charming rooms in a 19th century country cottage can be had for 50 pounds ($101).
The porcelain auction I planned to attend was three days away. In the meantime I wanted to show my fiancee, who is Korean, the principal cities of the Roman triangle.
We began in Bath. The city is famous for Jane Austen, the soft golden stone of its architecture and the Roman baths. Two years ago the baths were renovated. It’s now possible to bathe in waters the Romans enjoyed over two thousand years ago (www.romanbaths.co.uk). In the same complex is the Pump Room. This is where Jane Austen used to dance when she was writing “Pride and Prejudice” and it has not changed much since 1813. A small orchestra still plays every afternoon. On a crisp cotton table cloth one has tea and scones and experiences a sharp pang of nostalgia for a more gracious past.
Bath also has wonderful shopping and is a base for some of England’s most innovative designers. Once Mammon has been satisfied, spend some time in Bath Abbey (www.bathabbey.org), where construction began in 1499. It was a favorite of Queen Elizabeth I, and the ladders to heaven that adorn the west front that she found so captivating are still a joy.
The next day we hit Wells. This city has a sublime, ancient beauty. There is a 10th century cathedral (www.wellscathedral.org), a row of houses built for priests in the 14th century, which is the oldest continuously inhabited street in Europe, and the Bishop’s Palace, a fortified 15th century house surrounded by a moat that has mute swans which ring a bell attached to the portcullis when they want to be fed.
My mother’s farm house was built in the 17th century and we ate most of our meals there. Thanks to advice from Asiana, we had successfully transported the essential ingredients for several Korean feasts, as I was anxious to introduce my mother to kimchi, bulgogi and gochujang. When we did eat out, in pubs and restaurants like Brown’s (www.browns-restaurants.com), the food was delicious with fresh ingredients and imaginative sauces. And we had fish and chips in Cheddar, a town in the midst of the largest gorge in the UK, where limestone cliffs have formed spectacular scenery populated by wild goats. The Cheddar caves are astonishing (www.cheddarcaves.co.uk) with many as big and spectacular as a subterranean cathedral.
And then it was auction day. We drove to Bristol through driving rain, the sort of precipitation that makes any Englishman proud. At the Dreweatt Neate auction house (www.dnfa.com) we began with an English breakfast of bacon and eggs, something that any Korean, with their passion for pork, would have enjoyed.
The auction rooms had antique furniture ― and porcelain. I focused on a 30-piece dining set made by Poutney and Company, a Bristol-based manufacturer. It was 90 years old and beautiful. All the pieces had a gold rim, a background of tiny flowers and a center medallion with a still life of fruit in a style that’s called “Provencal naive.” I loved it, as did my mother. She suggested I set an upper bid-limit of 200 pounds. I had a different plan. I had read that the English porcelain market was cold.
The auctioneer tried to begin the bidding for the dinner service at 50 pounds. He got no takers. “Forty pounds,” he said, with a broad smile. Silence. He could have been selling cold viruses. “Thirty pounds,” he offered, his eyes betraying irritation. Hands remained in pockets, including my own. I got a sharp jab in the ribs from my mother who, despite being an octogenarian, can still deliver a good thump. I ignored her. “Twenty pounds,” he asked in a plaintive voice. The audience seemed fascinated by their shoes. “Ten pounds,” he sneered. “Ten pounds,” I said. The auctioneer repeated my bid with a funereal tone. “Fifteen?” he asked. Silence. “Sold,” he cried, “for ten pounds.”
I was elated, for around 20,000 won I had a set of antique porcelain that would have cost me fifty times that amount in Namdaemun. For a further 100 pounds I got tea sets made by Royal Doulton, Aynsley and Royal Staffordshire. All three were over 75 years old.
The problem was how to get over 100 pieces of porcelain back to Seoul. We could have packed everything with a shipper and waited six weeks for it to arrive. But we wanted instant gratification, in the form of serried ranks of English porcelain marching across my Hannam-dong apartment. The solution was to secure everything in bubble wrap and place it inside a cocoon of soft-clothing. It is a testimonial to the skill of Asiana’s baggage handlers that I left a restful flight home with all the pieces intact.
Thus, mission accomplished. In one week I had enjoyed some of the most beautiful architecture in Europe, lush countryside, delicious food, a mother’s 80th birthday and we now have enough porcelain to open our own English tea shop.
Asiana says passenger numbers on their flights to England have risen by 16.9 percent in the first five months of 2007, compared to the same period in 2006. I hope more Koreans exploit the won’s strength to visit England. And when they do, I hope they eschew retail traps like Harrods. Instead, they should head to Bath and find a pub and an auction. Then they can truly savor what Shakespeare called “This blessed plot, this earth, this realm, this England.” 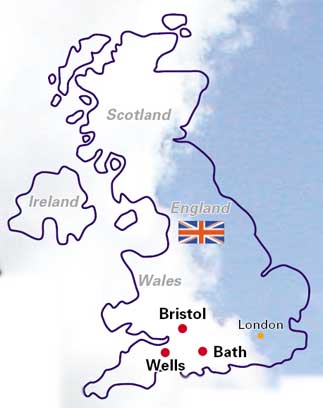 Information:
From Seoul to London: Asiana fly to London four times a week with a fleet of Boeing 777s. Flights leave Seoul’s Incheon Airport on Tuesdays, Thursdays, Saturdays and Sundays at 1:30 p.m. The flight takes 11 hours 35 minutes. Return flights from London leave on the same days at 9 p.m. London time. The return to Seoul takes 10 hours and 50 minutes. Passengers can choose from Travel or Business class. Discounted prices are available through the airline’s Web site, www.flyasiana.com.
From London to Bath: Take a National Express Bus (www.nationalexpress.co.uk) from the main bus terminal at Heathrow Airport. The journey takes two hours and costs 62 pounds for a return ticket.
Accommodation: Bed and breakfasts are the best way to see England without going broke. They are also the best way to get an intimate taste of English culture. Book rooms through www.bedandbreakfasts.co.uk.
Food: England now has some wonderful food, including some of the best Indian restaurants in the world.
To find the best eateries go to www.egonronay.com.