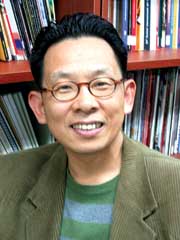 It appears to be destiny that Han Sang-jun is the head of the organizing committee for this year’s Puchon International Fantastic Film Festival. As a well-noted cinephile, he has been a writer and translator of books on French New Wave film directors like Jean-Luc Godard and Francois Truffaut.
He has also worked as a programmer for Korean films at last year’s Pusan International Film Festival, the biggest film festival in Korea. He started working with the Puchon festival last year, as a programmer. At that point the festival was then slowly recovering from friction between the festival organizers and the city officials. Apparently, Han made a notable contribution in normalizing the festival administration, as he was selected as the head of the organizing committee for this year.
In a recent interview he talked about the friction between city officials and the previous festival organizers: “Last year, it was really hard. Filmmakers and actors [siding with the fired festival organizers] changed their minds about supporting us just two weeks before the festival began. This year it’s a completely different story. We are having a fresh start.”
Han said that this year’s festival is paying particular attention to the exchange and cooperation with the international film scene. “Our festival has ties with the European Federation of Fantastic Film Festivals,” Han said. “And I think we can play the role of a marketplace where people from both local and international film scenes can have quality contact with each other.”
He also noted that, from this year, the Hollywood Reporter is taking part in the festival as a sponsoring publication.
Regarding the movies in this year’s festival, Han noted that there is a focus on horror films.
“Maybe it’s because our programmers this year are young and have no fear. I hope the young festivalgoers will find our selection enjoyable,” Han said. Of the Korean films presented this year, he said that many of them take “realist subject matter and apply fantastic techniques.”
Wrapping up the interview, Han said, “We have done everything we can, and we are now just hoping for good weather.”