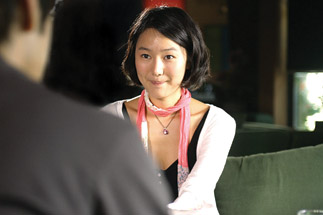 A Good Day to Have an Affair

Even with some thought, it’s not easy to figure out whether Jang Mun-il’s “A Good Day to Have an Affair” is a movie for a girl or a guy.
The film dresses up as a girl’s movie at first, starring two female heroines as married women delving into their search for lost identity and sexual desire. Yet it’s unclear whether their escapes lead them to find something meaningful in life or surrender to the system.
“Tweedy” (played by Yun Ji-seo) meets “Two Foxes” on an Internet chat line as a refuge from her meaningless marriage to her husband, who “stopped talking as soon as he entered the wedding chapel.” She finds freedom in Two Foxes, an immature womanizing banker who is always too busy fondling her chest in love motels and making up cheap, dirty stories about his sexual fantasies.
“Dew” (Kim Hye-su) has a light affair with a young boy she also meets on a chat line, “the college student,” but she’s constantly chased around by a private investigator hired by her husband.
The film triggers an uncomfortable tension, mainly because it tries to inject humor in an effort to lighten moments that are just too painful to watch. Despite the casual character established by Dew and her jolly relationship with a naive college boy, the desperation fumes when she hysterically hides in a balcony of her girlfriend’s house when she finds that her husband has come to take her. She approaches him only when he tells her, “I promise I won’t hit you.”
But even without such drama, trivial details of their short-lived romance ― giggling at silly humor, running away on highways and making out in daylight motel rooms ― are sad images of loneliness and fading love.
The film’s stance on Dew is unclear toward the end.
On one hand it seems as if she purely aims for freedom without the fear of moral judgment. Yet later we learn that the whole point of her affair started out as a revenge against her husband, who was in love with another woman for three years.
To spoil your expectation about the film’s title, there is not a real good day to have an affair.
Instead of an answer, the film plays with the pun of “wind,” which also means “an affair” in Korean.
Are these affairs like the wind in how they can come and go? Or like the song “May the Wind Stop Blowing,” which is played near the end. Was the affair for these women simply a means of sentimentalism to escape their life of boredom?
The film mimics the shape of a road movie.
Near the end, the three characters ― Dew, Tweedy and College Student ― leave on an adventurous joyride with a wrecked car.
If it had been a girl’s movie, the film would have ended there. But in “A Good Day to Have an Affair,” the car blows up, and the women end up in a hospital.
Then the sequence changes and the women are back to their married life, strolling around a gallery and dozing off during a concert.
In the next scene, they appear on stage in a chorus and sing “May the Wind Stop Blowing,” a nostalgic Korean song from the 1980s sung by a female teenage pop star.
It’s understandable why the director selected such a vague ending. Nevertheless, the idea seems like an abrupt compromise, though in the end that’s probably an ending that pleases most men and women.
We complain about reality, but few have the courage to subvert it. As an option we seek pleasure in our everyday life. Case in point, an afternoon memory of Dew, in which she strips chicken meat off the bones for her young boyfriend in a restaurant.