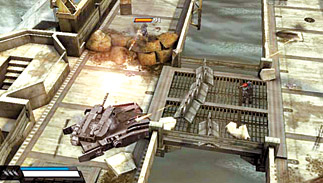 Stealth mission, intense thrill and cool weapons ― what more can a guy ask for?
Killzone: Liberation on PSP is hot and ready for surreal action. Compared to the first Killzone released on PS2, Liberation has made huge improvements. Notably, the rough designs and increased multiple tasks have been upgraded, tightening the intensity of the game. The story is a continuance of the first Killzone. The player simply has to battle against nemesis General Metrac, who controls the planet Vekta with his army of Helghast.
Without a doubt, the graphics are amazing. The breathtaking details give the game a touch of reality.
The player is given various missions to complete, including infiltration of an enemy base, rescuing hostages and creating sabotage.
The player starts with a standard machine gun. The weapons are upgraded, including grenades, as the player successfully complete each mission.
The battles are speedy and some of the missions, such as giving orders to comrades and dismantling mines, really make your palms sweat.
The multi-task missions are the significant factor that differentiates Liberation with other action shooting games of this genre, which mostly focus on just shooting enemies. The biggest drawback to Liberation is the difficulty of its control.
For a beginner, this game would be one of the hardest to get used to. Unlike its predecessor, Liberation uses the third-person view. It previously used a first-person perspective.
By Lee Ho-jeong 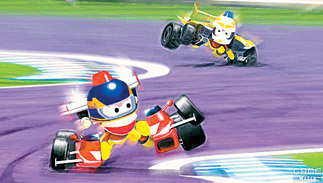 Ape Escape Pipo Ape Racer is a racing game with a comical twist ― and it has a lot of flaws.
The graphics are nice and attractive, especially the character designs.
The sound is good, and the music elevates the enjoyment of the funny race.
There also are a lot of unlockables, such as disco balls that blind the competition or guided missiles that heighten the action. It’s not bad, but compared to similar racing games, Ape Racer loses its edge ― especially considering that the wacky online racing game Kart Rider has had a huge following in Korea for years.
The biggest and most crucial problem with this game is that it has limited racing tracks ― there are only four.
The courses aren’t that bad considering their short length.
The layout of the tracks is challenging, especially when competing against tough opponents. Players must be particularly alert when making turns in a tight corner.
But because the tracks are limited, players might find themselves circling the same old track over and over again.
At first it might be fun, but it gets boring quickly.
Another disappointment in this racing game is that it does not have an online system, which makes it impossible to compete with other gamers.
The success of Kart Rider, many gamers have suggested, was the intense race competition with random people online.
Ape Racer may be fun to play alone, but how long can a person enjoy the game when racing on only four tracks without online competitors?
Ape Racer is a fun game, but not something that is recommended for purchase. By Lee Ho-jeong