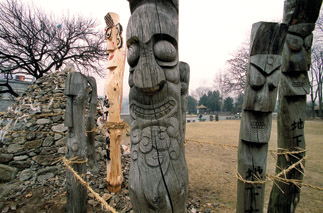 Jangseung, which used to sit at the entrance of every village, are totem poles that are believed to ward off evil spirits, especially those carrying epidemics from China. By Choi Jae-yong

Cheongyang County in South Chungcheong held a two-day festival in April to celebrate the craft of jangseung, or Korean totem poles. Celebrating its ninth year, the festival drew a crowd of 5,000 people, who observed musical performances with traditional instruments and had the opportunity to carve their own jangseung.
Jangseung, known as “devil posts” because of their huge, bulging eyes and crooked buck teeth, are a type of totem pole that once marked the entrance of every village across the country.
In general, there are two types of jangseung. One is called mok jangseung, made out of wood, and the other is seok jangseung, made from stone.
Mok jangseung are most commonly carved from pine wood, while seok jangseung are generally made of granite. Both are decorated with black ink rather than colors.
Scholars are at odds over the origin of jangseung. Some believe they date back to prehistoric times and that they originated from outside the peninsula. 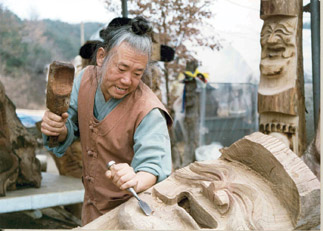 In recent years jangseung have lost their religious significance and are treated as tourist attractions.

Joo Kang-hyeon, a scholar of Korean folk culture and author of “The Riddles of Our Culture,” found the word jangseung is mentioned in historical documents dating back to the Silla and Goryeo dynasties. However, in these records, jangseung are mentioned for their use as boundary poles to delineate the borders of large Buddhist temples.
Joo notes the similarities between jangseung and other wooden totem poles such as chukchee, koryak, yukaghir, gilyak, goldi and orochi found in Siberia and other North Asian regions. He believes the Korean versions could have been derived from these foreign types of folk art.
Kim Doo-ha, author of “Jangseung and Beoku,” examines the historical roots of the poles and says that he believes they first appeared in Korea during the early Silla Dynasty. Beoksu is a name that is commonly used for jangseung in the Jeolla and Gyeongsang provinces.
In his book, Kim writes that along with Buddhism, the practice of feng shui, or pungsu in Korean, was also imported to Silla-era peoples.
By the end of the Silla Dynasty, many believed that the fates of the nation and one’s family were heavily affected by feng shui, the placement and arrangement of space to create harmony with the environment and the gods. Those who practiced pungsu believed that the placement of Buddhist statues or towers could bring balance to a region and cure any maladies.
By the time of the Goryeo Dynasty, this practice had evolved into a full-fledged religious belief. As temples were erected across the country, jangseung acted as links between them. By the Joseon Dynasty, wooden poles featuring carved human faces were prevalent, often placed at intervals of 4.5 kilometers along major roads. 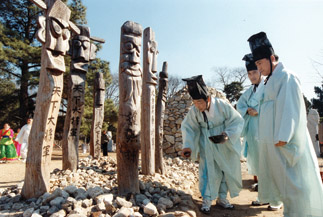 The ritual of jangseungje, to give thanks to the jangseung for their protection. [JoongAng Ilbo]

As Buddhist spiritual beliefs declined, an onslaught of crime began to spread among villages. Korean jangseung were erected as guardians to protect villages from such problems.
Jangseung also began to be used as village guardians against diseases, and people believed they could ward off evil, epidemic-carrying spirits from China. The hideous faces carved on the top of the wood or stone structures were thought to deter these invading specters. People also believed that jangseung would increase the likelihood that pregnant women would give birth to boys. Jangseung additionally served as border markers, separating private farmland from public areas where firewood collection was permissible.
The jangseung that remain in villages today were mostly erected in the later part of the Joseon Dynasty. In addition, jangseung served as protectors of fortresses. Kim said the famous dolharubang, or old stone man on Jeju Island was a jangseung that protected the fortress gates.
“At the entrance of a fortress, human guards on surveillance duty could restrict the comings and goings of people,” Kim said. “However, humans didn’t have the ability to prevent the entrance of evil spirits that carried contagious diseases. They needed a divine being to assist the human guards. That was the jangseung.”
According to Kim, jangseung can take male or female form. Men are thought to wear the attire of military officers and women are dressed like brides. Both have large mouths that show all of the teeth and bear angry expressions meant to scare away approaching evil spirits.
Jangseung in Jeolla have very sharp, dog-like teeth that extend from the top of the jaw over the bottom lip. Their eyes are open to keep watch, and noses are either crooked or, more commonly, snubbed. 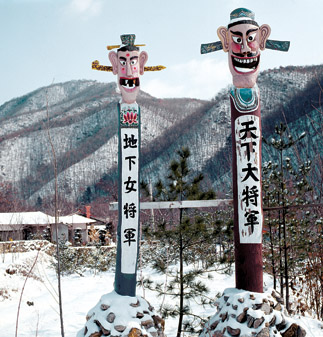 The jangseung in Gyeonggi and Chungcheong provinces wear long, thin beards. In the south, beards are thicker. Jangseung in the first two regions have ears, while those in the south do not.
Jangseungje is a ritual performed to show respect and appreciation for the village guardian that is held during jeongwoldaeboreum, which this year fell on Jan. 15, according to the lunar calendar. On this day, the people of the village gather around the jangseung and share food while praying for a year of health and wealth.
The festival starts after the village residents had selected the purest male among them. It had to be a man who had been free of bad luck for the past month. For example, his family had to have been free of sickness. The man should not have seen or touched objects regarded as bad omens.
The selected male is forced to leave his home until the day of the festival, cleanse himself daily with pure water and avoid making contact with anyone known to suffer from bad luck.
Meanwhile, the village people carve male and female jangseung, called cheonhadaejanggun, which means heavenly general (male) and jihayeojanggun, which means earthly general (female).
The two jangseung are planted in the ground on the day of the festival and are at the center of the rituals that follow.
Joo said jangseung are never set up alone. In most cases a male and female jangseung stand side by side. In cases where five jangseung are put up, they are placed facing north, south, east and west with one in the center, following the yin-yang wu xing doctrine, a concept that defines the universe as being composed of five elements. They could also be positioned to face in the direction of nearby Buddhist temples.

Hwang Loo-si, author of “Jangseungje,” said the festival is loud, as noise was regarded in the past as the best way to drive away evil spirits. Hwang said townspeople believed that the spirits of fallen warriors would come and occupy the cheonhadaejanggun and jihayeojanggun.
Today, very few villages practice this ritual. In the rare cases when the ritual is undertaken, it is motivated by tourism rather than religious belief.
Jangseung are now mostly limited to decorative use in front of buildings or restaurants, while most originals are preserved in folk museums. Their religious significance dissipated long ago.
Hwang wrote, “As time has passed by, religious belief in jangseung has become very weak and they have been turned into popular tourist attractions.”