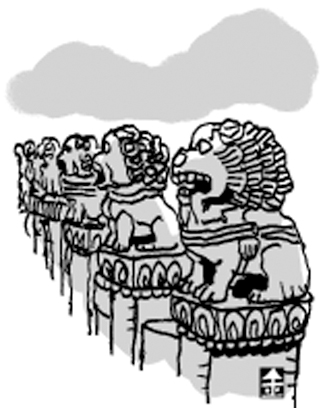 Fifteen kilometers south of Beijing stands a bridge named Lugouqiao, which foreigners call the Marco Polo Bridge. Its nickname comes from the book “The Travels of Marco Polo,” in which the explorer says that “It is hard to find a bridge like this one in the whole world.” The carved stone lions lined up on each of the bridge’s railings must have fascinated Marco Polo. Maybe it is because the emperor of the Qing Dynasty, Qianlong, praised the place and built a monument there as a place to watch the moonlight.
The bridge appears again in history books in an image that is the opposite of peaceful and elegant. At 10:40 p.m. on July 7, 1937, near the camp where Japanese soldiers were doing night training, gunshots were heard and a soldier disappeared.
He was found twenty minutes later, but the head of the Japanese Army concluded that it was the Chinese Army and began retaliatory shooting. This was the start of the Sino-Japanese War, which continued for over eight years throughout the Chinese territory. During the war, the Nanjing Massacre was committed by the Japanese Army.
No one is sure who shot first at Lugouqiao. Like the Manchurian Inciden, there are opinions that the Chinese Army fired, and some say it was the Japanese Army. However, what is sure is that the Japanese hard-liners turned this small collision into an all-out war.
The Chinese government opened a “Lugouqiao War Memorial” near the bridge in 1987. This shows how much meaning Lugouqiao bears, just by the fact that China chose this place from the numerous battlefields in the nation.
In 2001, Junichiro Koizumi, then Prime Minister of Japan, accepted the request of the Chinese government and visited the memorial during his visit to Beijing.
Last weekend, there was a ceremony held to remember the Sino-Japanese War, which occurred 70 years ago, with over 1,000 students and soldiers participating in the event. The two governments watched the event carefully, worrying it might spread to massive anti-Japanese demonstrations that could damage the two countries’ relationship.
This year is the 35th anniversary since the two countries forming official relation with each other.
Compared with the 70 years that they hated each other, they have only maintained friendship for half as long.
Although Premier Wen Jiabao visited Japan this April and called it “a trip to melt the ice,” the relationship of the two countries is still on thin ice.