For years Sangcheon, a small township in Andeok County on the southern tip of Jeju Island, was a sparsely populated area, mostly used by vacationers riding horses. There were few other attractions with the nearest beach a few miles away.
Then a buzz started to grow and artsy intellectuals began to mention the place in their coffee house conversations. The change in Sangcheon’s fortunes was initiated by the Podo Hotel, a boutique inn that has caught the attention of stylish travelers. In Korean, podo means grapes. While the hotel has no direct connection with the area’s vineyards, the building’s roof looks like a bunch of grapes when viewed from the air. This concept was the work of award-winning Korean-Japanese architect Itami Jun, who designed the single-story 26-room establishment which opened four years ago.
After a day spent at the Podo and nearby facilities, visitors may need to redefine their idea of self-indulgence.
The artful distractions that proliferate at the new resort town, which includes the Podo, differ from the other luxury developments and vacation homes on the island.
Aside from its grape-shaped roof, the hotel has walls finished with textiles that were colored with a dye made from local persimmons. The toilet signs are engravings based on local symbols for men and women. In the hotel garden there are profuse examples of the island’s diverse tropical flora.
The tasteful details continue at the Pinx Golf Club, which is less well known than Lake Hills or Jeju Country Club even though Golf World designated it one of the 100 best courses outside the United States in 2005.

The Duson Museum, the Duson’s exterior, the Podo Hotel and the Park Ryu-Sook Gallery. [JoongAng Ilbo]

The course has tributes to local tradition. The tee markers are made from stones carved by a local sculptor while the rest spots were built by a Jeju master architect who has been designated as an intangible cultural asset.
There are also museums and art galleries that have recently been added to the golf course and hotel complex.
Near Biotopia, a new development of townhouses built as vacation homes, Jun has built three museums with water, stone and wind as his themes. The museums function as an architectural gallery and there is no artwork inside. Each building is to be enjoyed as an empty space.
To urban property owners this might seem like a waste but it’s far from it. In “Wind,” visitors walk through a long building with a facade that consists of metal straps with thin layers of space between them. As a result, the wind can be felt blowing through the space. It makes a haunting sound, similar to the experience of walking in a forest at dusk.
“Stone” represents the island’s trademark rocks (volcanic rocks from the island are used to build the walls of local homes). It is a cavernous space with a path that leads to a stone installation.
“Water” offers a dynamic experience. The building is a simple concrete square with a hole in the dome-shaped ceiling and a pool of water below. The pool is a good place to meditate and allows visitors to witness different shade of natural light.
Jun also designed the Duson Museum on the same site, a gallery in the shape of two hands clasped together ― and this museum actually houses artwork.
A few minutes walk from Duson, the Park Ryu-sook Gallery, (064)792-7393, originally based south of the river in Seoul, has set up a weekend outpost. The gallery is based on an entirely new concept in commercial art dealing.
Park, the gallery’s owner-director, bought one of the vacation houses in the resort town and transformed its living room space into a home gallery, which is open on weekends only. Currently the gallery has an exhibit of works by Bill Beckley, an American photographer.
“The idea is that we go where the clients are,” Park says. “Not the other way around.”
Indeed, a walk through Biotopia, a combination of the words “biotech” and “utopia,” provides a glimpse of tasteful luxury, even though the park and other homes are still in the midst of construction.
The community center, which is also open to outsiders, houses a gym, a restaurant and a public bathhouse where the water is full of milky extracts heavy on carbonic acid. The center’s restaurant offers fine pastas ― a rare find on the island ― and udon with noodles shipped in from Japan PER the orders of owner-chairman Kim Hong-ju, a Korean-Japanese who owns a franchise of over 2,500 lunch box restaurants in Japan.
The cost of all this luxury is high ― rooms at the Podo Hotel start at 400,000 won ($436) ― but it includes unusual works of art, a spa, a bowl of hot noodles, a cool hotel and one of the most beautiful islands in Asia.

Admission to Park Ryu-Sook Gallery is free. Biotopia can be reached by taxi from Jeju Airport. It takes around 25 minutes and costs less than 10,000 won. Podo Hotel has three types of rooms. Western-style rooms range from 400,000 won to 800,000 won. Korean-style rooms range from 500,000 won to 1 million won. Both types of room come with a terrace. There is a royal suite with rates that begin at 1.5 million won. For more information call (064)793-7000. 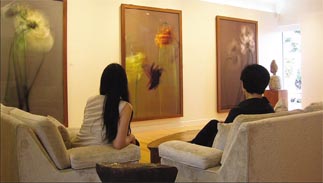