Director has a mission to remember

Director has a mission to remember 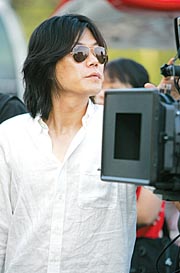 In January, Cine 21, a film magazine, surveyed readers to find out which event in modern Korean history they wanted to see depicted in a movie. Among the 542 people who answered, 41.5 percent picked the Gwangju Democratic Movement of May 1980.
At the end of this month director Kim Ji-hoon will satisfy their wishes with his new film titled “Remember U 518.” The Korean title of the movie refers to the code name for the military strategy that the regime initiated at 3 p.m. on May 18 to block civilian protest against the military regime.
“Remember U 518” is director Kim’s second film. His first was “Harbor Mokpo” (2004). The new film will star Ahn Sung-ki, Kim Sang-kyung, and Lee Yo-won.
The JoongAng Ilbo spoke to the director.
“I came across the Gwangju incident when I entered Hanyang University,” Kim said. “Until then, I had thought that the movement was just a rioters’ rebellion. I was embarrassed by my ignorance and indifference.”
Kim added that when he found out what really happened, he promised himself that he would make a movie and reveal the truth. 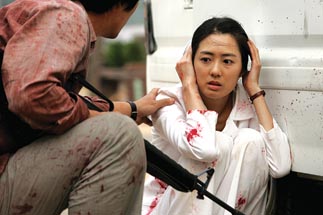 Scenes from “Remember U 518,” a film about the 1980 democracy movement in Gwangju.

The Gwangju movement has always been a subject of controversy as it involves the violent suppression of the people during General Chun Doo Hwan’s regime. After the assassination of Park Chung Hee, Chun seized power and declared martial law to suppress the pro-democracy movement.
When martial law was imposed, students in Gwangju protested in front of Chonnam National University. Soon after, they moved to the downtown area, where other citizens joined the protest. According to an official investigation conducted by the civilian government, 207 were killed and 987 injured in the violence that followed. This number is subject to dispute and many think the toll was much higher.
“With such a sensitive story, I didn’t want to harass the Gwangju citizens or the bereaved families,” Kim said.”
The movie focuses on Min-woo, a taxi driver who lost his parents when he was young and lives with his younger brother Jin-woo. One day he sees citizens violently attacked and suppressed by the military and many are killed or injured. Friends, families and lovers are lost and the struggle to survive begins. Some critics say that since Kim is a young director and didn’t experience the incident first hand there is a limit to how he can capture the true emotions of the incident.
“All I wanted was to reflect the pain and sorrow that people faced during that period,” Kim said in response. “I added a bit of cinematic imagination to the characters in order to reveal their genuine sentiments.” He wanted the film to be more than a documentary.
“It’s not fiction though,” said Kim, “I reorganized and recombined the characters based on the known facts.”
Kim’s recreation of the story includes the characters’ use of standard language. Despite the fact that people from Gwangju have a pronounced accent, all the characters, except In-bong (Park Cheol-min) and Yong-dae (Park Won-sang) speak standard Korean.
“I felt that the characters’ use of the Gwangju accent would ruin the story’s true feeling and might make it seem comic. In Park Cheol-min’s case, he is from Gwangju and Park Won-sang is very proficient with accents since he used to work in the theater.” 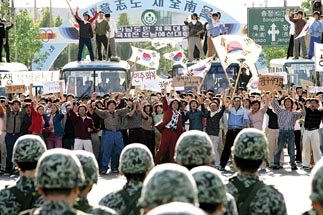 Scenes from “Remember U 518,” a film about the 1980 democracy movement in Gwangju.

He also said that he met many people from Gwangju while shooting. “The Gwangju people say they hope the movie will attract a big audience, so that people realize the incident was not just a tragedy for Gwangju but for the whole of modern-day Korea.”
Twenty-seven years have passed since the uprising. The military regime that suppressed Gwangju has been punished and the rights of the people have been restored. “If I focused to much on this aspect, it would be a rather serious and dull drama,” said Kim.
“Rather than focusing on the incident, I wanted the movie to based on character, so that people today realize the emotional pain that people experienced,” Kim said.
Talking about emotions, Kim said shooting the film often made him sad. “My first baby was born during the shoot,” he said. “At the same time I met families of victims and realized how much they had lost through the premature death of their loved ones.”
“I was very moved by Kim Sang-kyung’s acting,” he said. “I just couldn’t stop crying. I even forgot to say ‘cut’ I was too full of grief and sorrow.”