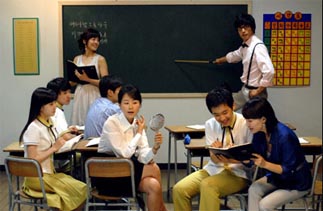 “Keeping Up With Gangnam Mothers,” offers an intriguing view of Korean society. [SBS]

If you live in southern Seoul without 1 billion won ($1 million) in the bank, drive a foreign-made luxury sedan without 2 billion won or send your child to study abroad without 3 billion won, you are insane. At least that’s the view expressed by a popular new TV drama, “Keeping Up with the ‘Gangnam’ Mothers” on SBS-TV.
I have a bitter sense of satisfaction that I do not meet any of the three conditions, especially as I agree with the Cheshire cat in “Alice in the Wonderland” who grinned and said, “We are all mad here. I’m mad, you’re mad.”
One doesn’t need a knowledge of English literature to understand the show’s premise, just a little local data. For example, the word “Gangnam” in the title means “southern Seoul,” yet it implies a critical social divide between north and south of the Han River. Apparently it’s not just the Korean Peninsula that is divided into North and South.
Southern Seoul is associated with everything upscale. Children there are rumored to have money to burn and use Gucci erasers which cost 140,000 won. Well, I have not felt any terrifying inconvenience during my several decades of living in northern Seoul. Instead I have been appalled by things like the absurdly overpriced (and amazingly insipid) soft shell crab pasta at a so-called hotshot Italian restaurant in Cheongdam-dong, southern Seoul. Of course, it’s not wise to generalize from a bowl of pasta or a Gucci eraser. Yet, that is precisely what “Gangnam Mothers” does and viewers seem to love it.
Southern Seoul is described in the show as a place with all the best middle schools, fathers with money, mothers with information about the best educational opportunities and where children enjoy a higher chance of going to prestigious universities.
Meanwhile, northern Seoul is described as a place with an inferior living and educational environment for the terminally un-chic.
Min-ju, the show’s lead character, dreams of moving to southern Seoul, when she learns that her ingenious son is falling behind the well-heeled children in southern Seoul. To Min-ju, a widowed single mother, her son means everything and she is ready to do anything for him, including running up debts to get a lease for an apartment near a prestigious middle school, lying to her best friend and trying to bribe her son’s homeroom teacher.
The TV drama’s online bulletin board has received a flood of messages that condemn the producers for what the protesters say are extreme descriptions. However, a change of strategy seems to be the last thing that the producers seem to have in mind. To them, the fact that viewers are reacting to the drama is a sure sign that viewers are intrigued and will keep watching. And one plaudit this show deserves is that it has stayed away from the hackneyed Cinderella formula which is currently so common.
In the meantime, I have no plan (yet) to move to southern Seoul while I’m still enjoying my life in the north.
But I have to confess that this drama has successfully annihilated my confidence about raising children in northern Seoul. It seems to be an enormous burden in this country to raise children and support them through prestigious universities.
Would it be too irresponsible for me to say that I will let my children live their lives as they wish? According to this drama, it would be. I mean, I can’t imagine ending a day waiting until 1 a.m. for my children to finish class at a private institute, which was exactly what the southern Seoul mothers were doing in the show last week. Isn’t it an obsession to force all your hope on your children like that? Well, according to the “reality check” offered by this TV drama, I would be a crazy mother who had abandoned responsibility for my children if I didn’t.
The Cheshire Cat seems to be right. We are all mad in this wonderland world.