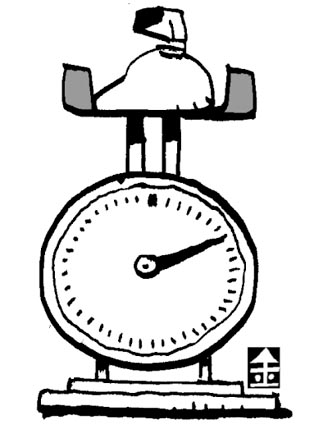 Christopher Columbus was adventurous and witty enough to explore the New World and to make an egg stand on end, but it seems the explorer was not at all good at math.
He was quite correct in thinking that to reach India, one had to sail across the Atlantic Ocean and then westward.
However, to read a French map that put the distance between Asia and Europe too close was a mistake. Even worse, he miscalculated the distance. He thought one mile, which is equal to 6,082 feet, had 5,000 feet. For he underestimated the circumference of the equator by more than 5,000 miles, when it is in fact 24,600 miles. He hailed the whole New World after stepping on the American Continent. The tale is from “Forbidden Knowledge” by Mental Floss.
This seems to be the best read for those officials who are pushing the metric measurements.
The authorities concerned are busy stressing the inconveniences and inefficiency of using measurement units such as pyeong, the Korean measure for dimension, and geun, the Korean measure for weight, in everyday life.
They insist measuring gold in don brings about an annual loss of 3.2 billion won ($3.4 million) in transactions. A half don weighs 1.875 grams, and a scale that calculates down to three decimal places is needed in the jewelry business. About 15 percent of shops are estimated to lack the proper scale. The government explains that either the shop owners or customers are cheated out of 0.005 grams.
They even blame the measurements in explaining the main cause of car accidents at the America-Canada border. They add that American drivers tend to overspeed when they enter areas where speed limits are posted in kilometers (a mile is equal to 1.6 kilometers) because in the American system, speed limits are stated in a miles per hour.
Ten days have passed since the new measure unit began to be used.
The unit of measurement upholds human society with common standards. Changing the conventional unit of measurement has always caused a lot of difficulties throughout human history, yet the trend toward the world community of no boundaries needs a standardization of measurement. We have become so accustomed to traditional measurements that they have become a part of our body, like the yard or pound in Western culture.
In the meantime, people should not be fined for using proverbs like “A widower carries three bushels of rice while a widow three bushels of silver,” even though we agree with the government’s policy to adopt metric units as our official standard.