A funny farm for children offers a fast route to English

A funny farm for children offers a fast route to English 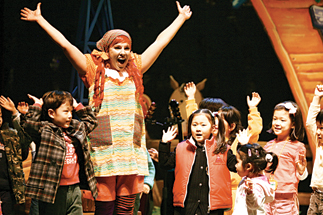 Sure it’s not a big musical like “Cats” or “The Music Man.” But considering that its target audience is well below their teenage years, “Uncle Cookie’s Funny Farm” seems well-equipped to entertain and educate.
“Funny Farm” is an interactive children’s musical. There is Uncle Cookie, a man who loves all living life forms, along with Jojo, Bumbles, Barney and Lulu.
Jojo is the oldest among the four and he works on the farm. His specialty is helping others.
Bumbles, who stutters, is a shy character who is scared of most things. He respects Uncle Cookie and Jojo to the highest degree while envying Barney’s enthusiasm and the courage of Lulu, the only girl on the farm.
Barney is not the smartest of the four and is always fighting with the farm’s ducks.
Robert Gardiner, one of the performers, said the show’s objective is to teach English to children at an early age.
Gardiner, a Canadian, has lived in Seoul for 13 years and for the last eleven he has been teaching English to young Koreans at the Froebel Education Company.
The Canadian said he has been performing in musicals since he was 10 and currently teaches English to children between four and six.
Gardiner said the musical helps children get familiar with English by repeating songs that are accompanied by dances.
Other performers include Christopher Hughes, Lisette St. Louis and Boyd Kelly, who all work for Froebel and appear on EBS’s English education show, “Go Go Giggles.” 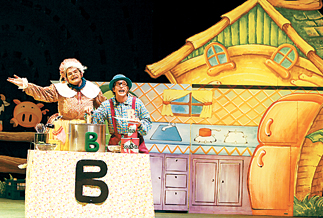 Along with Gardiner, the actors have performed for young audiences throughout Korea.
The producers of this musical are Song Seung-whan and Lee Kwang-ho. Song is known for producing of several local and international hit productions such as “Nanta, “which uses kitchen utensils including knifes, frying pans and pots as instruments, and “Jump,” which combined music with martial arts.
“Uncle Cookie’s Funny Farm” runs from July 14 through Sept. 2 at the PMC Theater in Mokdong, southwestern Seoul. The 70-minute musical is performed at 11 a.m., 3 and 5 p.m. Tuesdays through Fridays and on Saturdays at 1, 3 and 5 p.m. On Sundays and holidays the show is at 1 and 3 p.m. Funny Farm will be not be performed on Mondays. Tickets range from 25,000 won ($27) to 35,000 won.