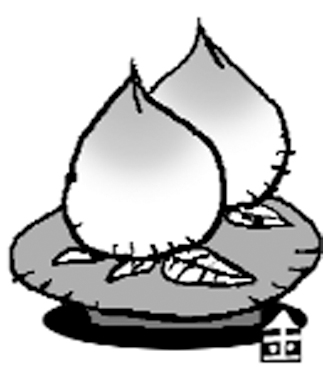 In the state of Qi, three men were well-known for their courage during the Spring and Fall Period in China. One man killed a tiger, which had attacked a king who was hunting, with his bare hands. Another man used his sword to kill a giant snake who had approached the king while crossing the Yellow River. The third man saved the king under siege by using just an iron mace. Because they were all outstanding martial arts experts, no one, not even the king, would fight against them. They had a reputation for saving the king, but their gargantuan power became a national headache that disturbed the order of the state.
A prime minister became very angry at the heroes because they did not bother to show him respect when he walked in front of them, even though the prime minister was second only to the king in rank. With the king’s silent approval, the prime minister decided to get rid of the three men. The king, as part of the prime minister’s plot, obtained the five best peaches in the garden for a feast for a state guest. The king and another visiting king each ate one of the five peaches, and the prime minister also had a peach to celebrate his diplomatic achievement in building rapprochement between the two countries. The problem was the other two peaches.
The three heroes wanted them. First, one hero snatched one of the peaches, mentioning his deeds. Then one of the others grabbed a peach, mentioning his excellence in fighting off the giant snake.
“What about my peach?” asked the third man, who didn’t get a peach. He could not control his fury.
The warriors reached their limits here. The man who didn’t have anything to eat was unable to read the machinations of the prime minister. The ill-tempered warrior committed suicide by his sword, saying that he did not receive his due despite his excellence. The other two men also committed suicide, bemoaning the fact that they were blinded by peaches.
This story can apply to the Grand National Party, which always falls apart amid infighting after very rare reconciliations.
In their craving for the two peaches -- presidential power and recovering their status as a ruling party -- they have just indulged in infighting. Their foolishness at being unable to read the bigger picture is just like the warrior who only knows how to use his sword. The GNP must have been blinded by their “achievements,” believing they have done a great deal for this country.
The people’s minds are already leaving the GNP, just like the prime minister who handed over the two peaches.