A grand park beckons on the edge of the city

A grand park beckons on the edge of the city

Above:The Singing Man” by Jonathan Borofsky By Cho Jae-eun. The entrance to the National Museum of Contemporary Art. Right: “The More, the Better,” by Paik Nam-june, displayed inside the museum. [JoongAng Ilbo]

After the recent rain storms, it felt as though the surface of the earth might be sinking. At the Seoul Race Park in Gwacheon, Gyeonggi the race horses reinforced this feeling as their hooves pounded the ground, causing little earthquakes for those standing near the rail.
The thunderous noise of the horses as they headed toward the finish line aroused the passion of the crowd, who seemed oblivious to the weather and their surroundings. Their eyes were fixed on the horses and the gleaming results board.
Being a first-timer, I was full to the brim with fantasies about race tracks. I expected rich old ladies with wide-brimmed hats and gallant young men leading majestic horses past numerous admirers. Although I knew these were fantasies, I was still shocked by the scene at the ticket booth.
The first thing that caught my eye was a sad, middle-aged man sitting on a picnic blanket near the betting booth. His hands covered his ears and his head was bowed.
I asked a woman next to me how much she had wagered and she replied “Two-hundred-thousand won ― darling, this ain’t for fun.”
I had bought a racing magazine for 1,000 won ($1) in front of the Seoul Race Course Station (five minutes away from the track) and had decided to bet on a horse named “Miracle Girl.”
With no prior knowledge, a catchy name seemed a good enough reason to bet on a horse. Miracle Girl failed to deliver a win that day but it was comforting to know that my loss didn’t involve 200,000 won.
As minutes passed, the intensity escalated and desperation seemed to fill the air. Men were fidgeting, smoking away, unaware of little children sitting next to them. Betting slips were torn up and ground into the dirt.
I left the stadium and walked toward the subway and my next destination, Seoul Grand Park. I was hoping to encounter a different atmosphere.
Much like New York’s Coney Island, Seoul Grand Park in Gwacheon often serves as a nostalgic escape from the chaos of the big city.
Just 45 minutes from Seoul City Hall by subway, the park conjures up images of middle school outings in spring and a day spent painting, writing and eating food on sticks.
The park, including a zoo, a hiking path, amusement park, IT World, a botanical garden and the National Museum of Contemporary Art, is probably the largest organized open space in the Seoul vicinity, with an area of over nine million square meters.
Even though Gwacheon is less than an hour from Seoul, the area feels more distant. Its streets are cleaner and wider and the air is noticeably fresher. People on the sidewalks do not seem as frazzled.
Cheonggae Mountain wraps around the park and its trees provide crisp, fragrant air.
June and July are the rainy season in Korea and the sharp smell of humid vegetation and damp earth was inescapable on the day of my visit.
All the familiar signs of the coming season were evident in the park. Cups of cheap beer were flowing at small convenience stores and young couples walked hand in hand, the boy often holding a stuffed animal under one arm.
The rain that day came in moody spurts and there weren’t as many visitors compared to sunnier weekends. 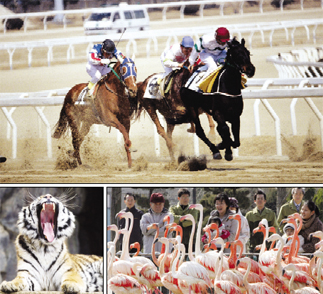 Left, clockwise: A horse race at the Seoul Race Park, flamingos at the zoo in Seoul Grand Park and one of the zoo’s tigers. [JoongAng Ilbo]

The park and its tranquility begged to be taken advantage of, so when I reached the Museum of Contemporary Art I secured a picnic table in the spacious front yard of the museum. I unfolded a sandwich and poured some hot coffee from a thermos I had brought with me.
A row of white picnic tables and chairs stand in front of a small stream separating the museum from the rest of Seoul Grand Park.
A robotic statue titled “The Singing Man” by Jonathan Borofsky stands in the yard as if guarding the museum. It is close to two and a half meters tall and, as its jaw dropped, it began to hum an unrecognizable melody resembling an eerie David Lynch song.
After lunch, I stepped inside the museum to look at special exhibition including “Memory Unforgettable: Georg Baselitz’s Russian Paintings,” “Artist of the Year 2007 - Yeon-doo Jung” and “Line Drawing with Steel ― Bernar Venet: Line, Trace, Concept.”
The museum has a vast collection of modern art, from Paik Nam-june’s video art tower “The More, the Better,” consisting of 1,003 monitors, and works by modern Korean painters who helped shape the dynamics of 20th century art, including Lee Sang-bum, Whang In-kie and Yoo Young-kuk, among others.
The building itself is a work of art, with traditional Korean architectural elements mixed with western influences, such as old designs from Korean castle walls incorporated into the minimalist modern structure.
It took around an hour and a half to look around the museum.
Two stations away on the “elephant train,” a theme park-style ride that serves as a shuttle bus through Seoul Grand Park, I reached a hiking trail with statuesque pine trees hovering over the pathway.
Looking ahead, the trail seemed endless, with the soft echoes of raindrops falling from the leaves. The rain had made the trees verdant and I almost felt guilty enjoying the scenery with almost nobody around.
The trail is divided into four courses, ranging from one that takes 50 minutes to one that requires two hour and a half hours of serious hiking.
This trail is unique to Seoul Grand Park and unlike other amusement parks, it seamlessly connects the mountain to the man-made structures of the park.
At the end of the 50-minute trail is a small entrance to the zoo.
Luckily, I was just in time to see the flamingo show. The zoo currently breeds 360 species and holds special houses for bats and insects.
I walked around noticing that some animals, such as the monkeys, seem to thrive on attention while others, like bears, looked a bit more reluctant to encounter strangers.
By 7 p.m., I was ready to head back to Seoul.
Strolling through the park all day in the rain felt like an odd dream in which I was the only grown-up sitting inside my 5th grade classroom.
The water had blurred my sense of time and place so that my trip to Gwacheon seemed as alien as a trip to South Africa or Morocco.

The hiking trail in Seoul Grand Park. By Cho Jae-eun

Seoul Grand Park has a zoo, a botanical garden, an amusement park, the National Museum of Contemporary Art and an IT World. Visitors travel around on the elephant train or in their own vehicles. The park holds numerous events during the year such as the Cherry Blossom Festival, Animal Cartoon Competition, Rose Festival, Starry Night Festival and Chrysanthemum Festival. Seoul Grand Park Station is on line No. 4. For more information, visit www.grandpark.seoul.go.kr (the homepage can be read in Korean, English, Chinese and Japanese). 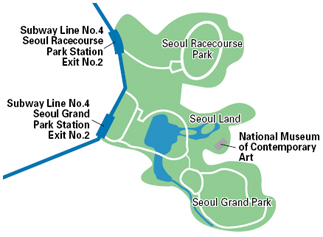 The National Museum of Contemporary Art was originally in Gyeongbok Palace but has moved several times. Now is a part of Seoul Grand Park. Along with its permanent collection of modern Korean art and its sculpture garden, the museum also holds special exhibitions. For more information, call (02) 2188-6000 or visit www.moca.go.kr.

The zoo has 3,400 animals and 360 species with regular flamingo and dolphin shows. Next door there is a botanical garden with orchids, cacti and an insect pavilion.

Seoul Race Park occupies the equestrian park built for the 1988 summer Olympics. There tends to be heavy traffic at weekends, so it’s best to use public transportation. The nearest subway is Seoul Racecourse Park, line No. 4. For information, call (02) 509-1221 or visit www.company.kra.co.kr.