Pack light for vacations in nirvana

Pack light for vacations in nirvana 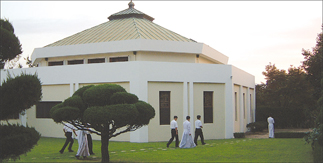 Luxury resorts with an abundance of great food and blissful scenery offer a great vacation for the mind and body, but what about the soul?
Sometimes a spiritual refuge provides a break that has more lasting effects. Korea has a growing number of retreat homes and temple-stay programs where the weary can detach themselves from worldly affairs and rest their minds for a few days. Here are some of the most notable places that offer a short vacation in nirvana. 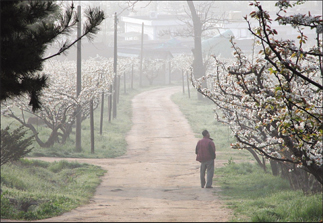 Order of St. Benedict, St. Joseph Abbey
San 93 Hwajeop 5-ri, Byeolnae Township, Namyangju,
Gyeonggi (031) 527-8115
If you are short of time and need a quick retreat, St. Joseph Abbey is the ideal destination.
It’s conveniently located on the outskirts of Seoul, in Namyangju, and is surrounded by a lush stand of pear trees tended by the monks.
The great advantage of a retreat to St. Joseph Abbey is that visitors can participate in the monk’s daily schedule.
Like the abbey’s motto, “ora et labora” or “pray and work” the daily activity of the monks is based on a simple lifestyle.
Visitors wake up at 4:30 in the morning, the same time as the monks. After morning mass at 6 a.m. (10 a.m. on Sundays) in the chapel, the monks head out to the fields for a few hours. Midday prayer is at 11:45 a.m. Then there is a scripture reading at 5:30 p.m. Dinner is at 6.30 p.m., followed by evening prayer in the chapel.
For a Catholic monastery, the place has a Zen Buddhist feel, with the mass based on traditional chanting and worshippers sitting on the floor of the chapel.
The Namyangju Abbey, the annex of the St. Benedictine Monastery in Waegwan, is a great place for a visit.
An early morning walk on paths through the pear trees with a view of nearby mountains is heavenly.
The organic pears produced by the monks are sold in 8 kilogram boxes for 25,000 won ($27) between October and New Year’s Eve. During summer, pears are made into juice and sold for 13,000 won per carton. The retreat house is a new building consisting of guest rooms and kitchen facilities. Visitors are asked to make a donation to cover the cost of their stay. To get to St. Joseph’s Abbey, take subway line No. 1 to Seokgye Station, exit 3. Take bus 45-2 to the last stop, Bulamsan. The abbey is a five-minute walk away. For more information, call (031) 527-8115. 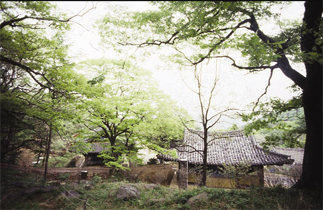 St. Carmel Abbey
50-1 Gyesan 2-dong, Gyeyang District, Incheon (032) 542-2625
St. Carmel Abbey began life as a convent started by three French nuns who came to Korea in 1939. In 1974 three Carmelite monks came to Korea with an Italian priest named Joachim Guizzo and relaunched the building as a monastic abbey. The Incheon Abbey was the order’s first monastery in Korea.
Today there are eight Carmelite monasteries in Korea. The abbey in Incheon, at the foot of Mount Gyeyang, has beautiful views of the surrounding forest and two other neighboring monasteries. Rooms are for two people. The fee is 30,000 won including three meals. 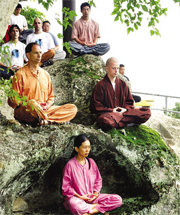 The Order of St. Benedict, Waegwan Abbey
134-1, Waegwan-ri, Chilgok County, North Gyeongsang
(054) 970-2000
Waegwan Abbey is one of the largest Catholic monasteries in Korea. It was set up in 1952 by a community of German monks who had been expelled from the Waegwan Abbey in Deokwon, North Korea. A group of German and Korean monks settled near the Nakdong River in temporary dwellings, planning to return to Deokwon as soon as the war ended. But the Communists demolished Waegwan Abbey along with the monks’ hope of going home.
The new abbey became famous for the great German sausages produced by the monks, which were sometimes sold to visitors. A few German monks remain, but the majority are Korean. Since 1964, when the monastery officially became an abbey, it has served as a major center of theological education.
The abbey’s monks focus on agricultural labor as their primary means of devotion but they also oversee a range of pastoral works, run three retreat houses and conduct theological education.
The abbey is in a huge compound surrounded by woods. It houses a workshop which makes stained glass for church windows, a goldsmith’s studio and the Benedict Press. a publishing house.
There is also an audio-visual center run by Sebastian Rothler, a Catholic missionary to Korea who introduced controversial art films like those by Krzysztof Kieslowski and Dominique Delouche’s “Edith Stein,” about a Catholic nun whose life reflected the tension between Christians and Jews during the Holocaust.
Because of renovations necessitated a recent fire, overnight stays at the abbey are currently unavailable. The compound is still open to visitors. 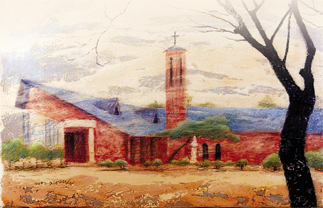 Temple-stay programs, available throughout the country, provide meditation, tea ceremonies and vegetarian meals. Most of them last for just a few days.
The program, which was introduced for foreign visitors during the World Cup games in 2002, is often intensive, beginning with early morning prayers and continuing with a tight schedule of activities that runs through the evening.
For information about temple-stays nationwide, visit www.templestay.com or call 032-937-0025. Advance reservations are required.

Golgul Temple
San 304, Andong-ri, Yangbuk Township, Gyeongju City, North Gyeongsang (054) 744-1689
Golgul, means “Stone Buddha Temple.” This cave temple is in the ancient Shilla capital of Gyeonju. It is one of the oldest Buddhist treasures in Korea and was carved out of solid rock during the 6th century by Buddhist monks who traveled from India.
The temple-stay program at Golgul Temple is an intense experience. Guests wake up at 4 a.m. to the sound of a moktak, or wooden block, and practice meditation as they listen to the monks reading Buddhist scriptures. A meditative walk around the temple follows before a traditional Buddhist meal. In the afternoon there is a tea ceremony and visits to other Buddhist sites around the area.
On July 21, the temple offers a one-day temple-stay program with a special focus on sunmudo, or Zen Buddhist martial arts and meditation sessions on a cliff near the temple.
The temple also offers basic lessons in Zen yoga, breathing techniques and a special lecture by the temple’s chief monk, who practices Buddhist martial arts.
The bus leaves at 8 a.m. from Jogye Temple in central Seoul. The fee is 85,000 won for the program and transportation.