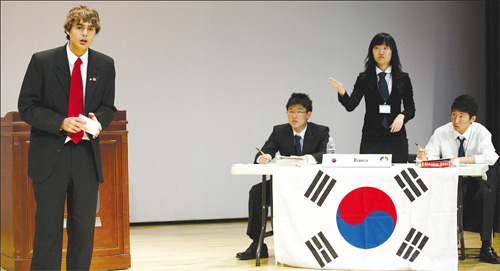 The Korean national team beat Peru in Round 3 on July 5. Provided by the organizer

Margaret Thatcher, the former prime Minister of the United Kingdom, said she loves argument and debate.“I don’t expect anyone just to sit there and agree with me, that’s not their job,” she said in a speech.
Among the many who may agree with her are 158 students from 35 countries who recently participated in the 19th World Schools Debating Championships in Korea.
It was the first time the event was held in Northeast Asia.
Scotland beat Singapore in the finals, held at the Imperial Palace Hotel on Wednesday.
“This is a historic occasion,” said Joshua Park, the tournament organizer and the President of the Korea Debating Association.
“Considering that Korea first participated in a competitive debate tournament four years ago, hosting a global event in such a short time is a great improvement,” Park said.
Competitive English-language debate for secondary school students in Korea dates back to 2004 when five students from Daewon Foreign Language High School participated in the world championships. although they were severely outclassed.
That year Korea ranked 25th out of 29 countries with only two wins and six losses. Among the top 16 teams were Singapore, Indonesia, Hong Kong and Australia, the 2004 winner.
“After the students came back from the 2004 tournament, they were shocked,” said Park, the coach at that time. However, the misfortune turned out to be a blessing.
“Challenged by other foreign debate communities, students formed debate clubs and held workshops,” said Park. In addition, they created debate organizations.
Following Korea’s efforts to create an English-language debate community, in 2006 a Korean national team was formed for that year’s world championships through a domestic tournament called the Korea High School Debating Championship.
In Wales, Korea ranked No. 8 and reached the quarterfinals.
“English debate in Korea is starting to grow,” said Peejay Garcia, Managing Director at Paragon Academy and coach of the 2007 Korean national team.
“Though debate is new and English is not their mother tongue, Korean students work hard to improve their weak points year after year,” Garcia said.
Garcia said that for this tournament, five members of the Korean national team practiced six hours every Sunday for seven months.
Team members are Chung Ha-bin, Chang Hoon-ik, Im Seo-hee, Jang Won-joon and Albert Hong.
Their hard work paid off, as they ranked 11th this year.
During a match against Lithuania, Jang, a senior at Hankuk Academy of Foreign Studies said, “Free trade rather than protectionism creates an export-based economy.”
Korea was debating the idea that free trade harms the developing world.
“Countries like South Korea and India prove that free trade provides more opportunities,” Jang added.
“Compared to other Western teams, Asian members are passive, except for Singapore,” said Chung, a Korean participant from the Korean Minjok Leadership Academy.
“Even though we have prepared plenty of information, when opponents toss us a statement that we don’t expect, we become discouraged,” she added.
One of the three judges during that match noted that the Korean team lacked style ― particularly the use of humor ― which is sometimes needed to make a speech more enjoyable for the audience.
“Debating leads to more assertiveness training,” said Kim Nam-hee, the Director of YBM Center for Educational Content Development.
“It allows students to fluently express ideas and have a critical and logical approach to a subject.”
The traditional Confucian Korean culture repressed free speech. Instead of asking why, students randomly accept things as they are, Kim said.
As an example she used a book. “Reading itself is important, but what’s even more important is how you read it.”
Though the number of debaters and tournaments are growing in Korea, Kim noted that a debate culture does not exist in the country yet.
“Gradually, Koreans should be more open to debating, either in Korean or in English,” said Kim.
In English-speaking societies, competitive debate is encouraged in high schools and colleges.
It also shares a longer history than the non-English speaking countries.
The world championship was founded in 1988 by Australia.
The teams in the first competition were Australia, Canada, England, Hong Kong, New Zealand and the United States.
Ji Nan-young, president of the Mapo YBM Academy, contributed to the development of a debate community in Korea.
Last Sunday, Ji led 19 elementary school students and visited Seoul English Village in Suyu-dong. They observed the Korea vs. Lithuania match.
“Though these primary students hardly understand what the debaters are arguing about, they get a chance to observe public speaking, as well as the gestures and attitude of the debaters,” Ji said. “Watching firsthand motivates the students.”
In addition to the children, about 150 student volunteers watched the event and some say debating has become part of their everyday lives.
“As a time-keeper, I observed debate matches several times a week,” said a volunteer. “I was motivated by the strategy used by the debaters and their well-informed content.”
“Compared to the past, more Korean parents now seem to emphasize logic, reasoning and thinking in the education they want for their children,” said Park. “Competitive debate motivates students to enhance these three elements.”