English D.J gets help from friends to make a proxy debut in Seoul

English D.J gets help from friends to make a proxy debut in Seoul 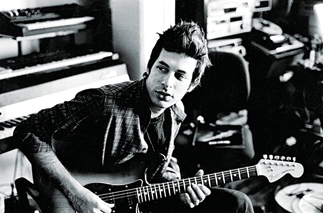 British musician and D.J. Mark Ronson.Provided by the organizer

Mark Ronson, an English D.J. and music producer, has yet made his mark in Korea but it seems as if that is about to change.
This Friday at Hongdae’s Club Cargo, there will be a launch party to celebrate the release of Ronson’s second album, “Version.”
Though Ronson will not be visiting Korea himself, three well-known DJs ― Guru, Takuma, and Flamenco ― will be laying down Ronson’s trademark beats .
He started his career as a DJ when doing gigs at downtown hip-hop clubs in New York City during the early 1990s.
“When I was 12 years old, independent bands would come over,” said Ronson. “In order to have an excuse to watch them, I got a job at a local music newspaper.”
Coming in contact with a variety of genres starting from hip-hop to free jazz, he moved on to producing music for pop idols including Christina Aguilera, Amy Winehouse, Lily Allen, and Robbie Williams.
Ronson’s debut album “Here Comes the Fuzz” was released in 2003, and featured artists such as Nate Dogg, Ghostface Killah, and Trife Da God.
His second album, “Version,” entered the UK Album Charts at number 2 in April and contains remixes of singles from other artists such as Radiohead’s “Just” and Britney Spears’ “Toxic.”
“This album is definitely a mixture of baggy, hip-hop, and independent music; people dance to the funky tracks,” said Ronson. “I like it when people are lost in music and dance in discord.”
DJ Guru said that Ronson’s music is a crowd-pleaser and that, his songs contain danceable elements that get people going. “The three of us [Guru, Takuma and Flamenco] will be reinterpreting the songs of Ronson by adding more electronic elements and beats.”
Guru also said that he is fond of underground music from the U.K and other European club music and chose “Stop Me” as his favorite single: “Its undeniably groovy,” said Guru.
“Even though Ronson is a well-rounded musician he’s not well known in Korea,” said Vivien Lee, the Product Manager of Sony BMG, the party host. “This is why we decided to introduce his music to the public first.”