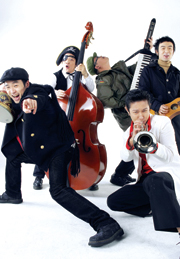 In the summer of 1999 over 15,000 eager rock fans had to head home after just one day when a sudden typhoon hit the Tri-port Rock Festival. Mega bands that Korean rock fans had only read about in magazines ― like Dream Theater, Ash, Deep Purple and Rage Against the Machine ― were in the line-up, with the press comparing the festival to Woodstock, Glastonbury and Fuji Rock.
“Ever since then, Tri-port had rain but fans keep coming back simply because there is no other festival like it in Korea,” said Kim Min-kyoung, a manager at Iyescom Entertainment which organized the festival.
Tri-port survived for six more years then, last year, it changed its name to the Pentaport Rock Festival. Since its Tri-port days, the festival has taken place in Incheon, which since the late 1990s has been trying to rebuild its image as an interactive, cultural/business hub. This year, the festival will take place in Songdo, a city designed by Incheon city government, Gale International and Posco as an international business district. Named the “Gateway to Northeast Asia,” the area will be used for three nights of music from 47 groups and artists from the United Kingdom, the United States , Japan and Korea including the Chemical Brothers, Muse, Testament, Stevie Salas, L’Arc~en~Ciel, Crying Nut, Damian Rice and Fantastic Plastic Machine.
“The line-up this year is different from other years. Electro-rock duo The Chemical Brothers and alternative rock band Ash will be there alongside the heavy metal band Testament. Last year, we felt that our line-up tended to slant toward alternative and modern rock bands from Britain,” said Eddie Oh, a manager at Yellow Nine, who helped organized the line-up this year.
He explained that the rock scene in Korea is polarized into two different groups, the heavy metal/hard rock group and the alternative/modern rock group. “We [Pentaport] wanted to provide an atmosphere where these groups could get rid the musical animosity they have towards each other,” added Oh. For local bands, he said that the organizers concentrated on featuring newer talent.
The Chemical Brothers will be the first band to perform at Pentaport’s “Big Top Stage” on July 27, followed by L’Arc~en~Ciel on Saturday and Muse on Sunday. The Chemical Brothers, who recently released their 6th album, “We Are the Night,” said that they were going to be involved in quite a few festivals this summer. Ed Simons (a member of the Chemical Brothers) added, “Festivals seem to get a lot of people who might not necessarily be totally versed in the Chemical Brothers’ music and they go for maybe the whole spectacle and then come away getting something out of it. That’s kind of a good feeling.”

The “Big Top Stage” will also include Testament (Saturday), Crying Nut and Ash (Sunday) as well as The Answer (Friday). Following this will be “Pentaport Stage” in which musicians including Damien Rice (Sunday) and Stevie Salas will perform. The last part of each day’s concert will be a “Groove Session” with musicians and DJs including Fantastic Plastic Machine, London Elecktricty and BT.
The organizers say that in global terms, Korea is still not in the major leagues and that guarantees for big-name foreign artists are very steep. “We want to make Pentaport something that will be accessible for all music lovers and not a ‘cult festival’. If Pentaport gets bigger, the guarantees will not be as steep and therefore, Korean fans can get to see more artists who haven’t performed in this country yet,” said Kim.